Not since 1917 has the United States of America been faced with the downgrading of its Credit Rating until this fateful Friday on 5 August 2011 from its AAA standing to AA+. Standard & Poor’s well justified its action evidently by US’ ceaseless mounting national debt & its inability to pay.

David Walker, former US Comptroller General, says he’s not surprised that Standard and Poor’s downgraded the U.S. credit rating for the first time in history.

There’s no doubt that these are tough times.

Europe and the US are both wrestling with the reverberations of the GFC as the various governments on either side of the Atlantic confront the reality that throughout 2008 and 2009 they were obliged to bail out the privately run financial miscreants with massive injections of taxpayer moneys, just to prevent a complete meltdown of the global financial system. It has been a close-run thing, and the latest aftershocks are an indicator that we have further to go. (National Times AU). 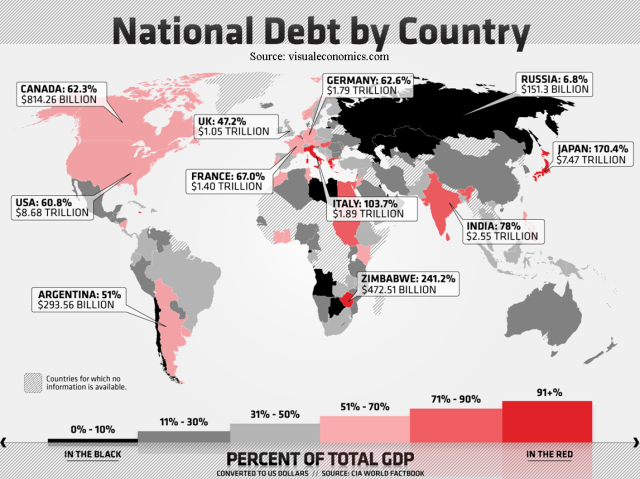 Setting aside all political rhetoric, just through simple common sense of the “Man in the Street” as against the “Men in Wall Street” – great financial wizards or more correctly manipulators & crooks, the game of living it up beyond the economic limit cannot go on & on. The world at large cannot be held at bondage to keep on supporting the glamour & luxuries that’s been put on show.

are all familiar to the layman, but completely thrown out of the window by the game that politicians play!

Take a close look at the above map of “National Debt by Country”. The key to take note is the debt percentage to the GDP (Gross Domestic Product). With the exception of Russia, most of the great rich countries, show a dismal performance in this economic aspect.

They say that the “Gate of Hell” has three main entrances: anger, lust & greed. In this case, GREED is the biggest culprit. The Romans had their fall. Similarly, such fate awaits the mighty & tall. For far too long, US has been pulling the economic wool over the eyes of the world – its currency has no tangible value as backed by gold . . . only the world’s confidence support it as the reserve currency. It’s really “toilet” paper money which US Treasury resorts to printing in plentiful amount in short term measures for long term benefits.

I remember the days during the Japanese Occupation in Malaysia, my father was landed with bags & bags of Japanese notes that were worthless as toilet paper! These days in Zimbabwe, people are going around with bundles of paper money for just daily shopping needs. Want to own a Zimbabwe billion dollar note?

There’s no such thing as being “Too big to fail!”

Without order, chaos will prevail!

Watch out! This financial virus is fast catching on globally!!!

One thought on “Global Financial Tsunami”