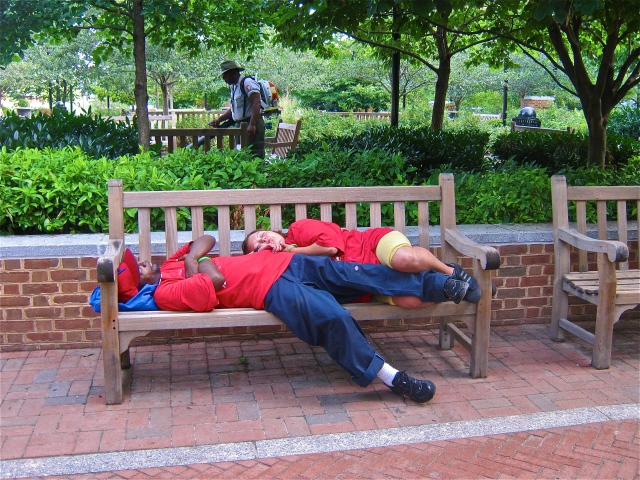 This was early in the morning & the Park daily activities were beginning to stir and they were totally oblivious to the awakening environment.

Homelessness is severe and growing in cities the world over and certainly not the kind of image any city would want to project. Except for Singapore, that “spit & span” city of the world, most other cities have a fair share of such problems.

In Taipei, I have seen people sleeping in shopping centre car parks. In Hong Kong, under the bridges & just about any sheltered areas are targeted. In Perth, a generally clean city where I live, parks & public places are not spared. You would expect that cities in developed countries would be spared when compared to the squalid slums of the third world countries.

From East to West

Vagrants have found their niche to rest.

Especially in downtown areas, one category of homelessness is especially problematic: Vagrants sleeping on benches, panhandling, relieving themselves in public, bathing in library restrooms – and costing taxpayers a lot of money.

Non-profits and volunteers are working diligently to address the problem, providing food, beds, rehabilitation programs and jobs counseling. But shouldn’t the government be burdening with such responsibilities?

In Guangzhou, China, the city authorities have taken the negative approach of constructing concrete spikes under the spaces of bridges to prevent homeless people from sleeping there, much to the annoyance of the city’s citizens.

Arrest & jailing the offenders is no deterrent for the hard core. They call it “three hots and a cot.” This is an expensive approach but to no avail. Some spent one or two nights, some spent weeks or months there, all at $60 per night. Most were back on the streets in a day or two.

With more homeless people flocking to big cities, the government should take a more humane approach to provide adequate care for those who live at the bottom rung of society, instead of leaving them alone or even expelling them numerically without any sense of human compassion.

Vagrancy problems are being perpetuated needlessly without any well planned strategy. In all cases, city authorities have learned that charitable organisations with their well intended “enabling” programs do not address the homeless’ plight. Enablingcomes in the form of hot meals in several locations, official tolerance of sleeping in public places, short jail stints, a shortage of rehabilitation programs and well-intended but gullible people who respond to panhandlers.

Robert Marbut, a top US consultant who has studied homelessness, has this to say: “We don’t help the homeless by enabling them.” Marbut’s approach is simple: Stop making it so easy to be a vagrant; make it more desirable for vagrants to seek help; and then redirect resources to assist them in a better calculated effort.

A transformation program will be to include education, rehab or training program to become more productive, shelter buildings & rigorous law enforcement.

Despite existing good programs, in the wake of economic misfortune many more are being left homeless – jobless men and women, often along with children – and in genuine need of help.

Achieving a humane, open and inclusive society where the vagrants are treated as equals still remains a challenge that requires the wisdom of the government.

When targeting to prevent homeless people from sleeping in public places, government can sometimes take the extreme step. For instance, in Guangzhou sharp concrete spikes were built under the city bridges. Too many homeless people used to congregate there under the bridges and some even cooked there posing danger.

Concrete spikes under under bridges or flyovers are a waste of land. Hong Kong sets a good example in making use of these lands to build main bus stations for passengers to easily recognize or garbage sorting stations.

In living day to day, under today’s living conditions with growing economic & social problems, unemployment & home foreclosures, life is difficult enough as it is. Why make it so hard for them to survive or force them into a life of crime?

2 thoughts on “Vagrancy Problems in Cities”