Beijing is building another Great Wall – this time it’s made of cars.

In China with the world’s largest population of 1.3 billion, and where everything is of out- size proportions, e.g. the Great Wall of China, Three Gorges Dam, the Grand Canal,

the largest of this or the tallest of that, nothing seems to amaze anyone more than its nightmare with traffic jam.

Traffic jam beyond your wildest imagination!!!

If you are one of those drivers confronted with road rage in traffic jams in Kuala Lumpur, Bangkok, or Jakarta, forget about driving in Beijing or be caught in one of their traffic jams . . . they could stretch for days on end. 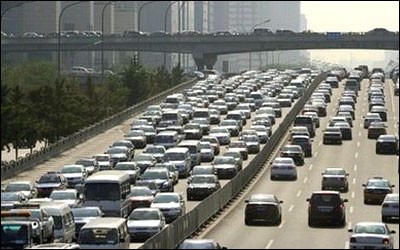 How about this: ONE traffic jam snaking into Beijing is 100km long and expected to last for a month . . .

showing how China’s economic growth and booming car numbers are still outstripping the billions being spent on infrastructure. 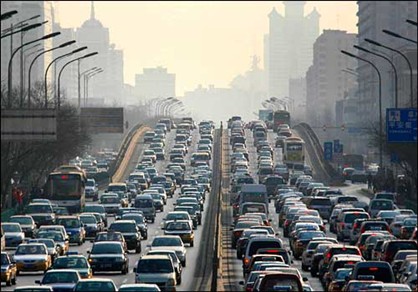 Baffled by the world’s longest traffic jam, the Chinese government has mobilised hundreds of policemen to clear the 100-km long stretch of the Beijing-Tibet highway, riddled with vehicles for 13 days, with the pile-up almost reaching the outskirts of the capital. Surprisingly, there have been no reports of road rage, and the main complaint has been about villagers on bicycles selling food and water at 10 times the normal price.

“Insufficient traffic capacity on National Expressway 110 caused by maintenance construction since August 19 is the major cause of the congestion,” a publicity officer with the Beijing Traffic Management Bureau told the Global Times this week.

The snarl up on the highway, on a section that links the capital to the Chinese region of Inner Mongolia was triggered by road construction and repair. While all sorts of vehicles appeared to have been caught up in the jam, it was mostly caused by lengthy coal carrying trucks, which brings fuel for the industries around the capital.

Traffic arrangements built up over generations in the U.S. are lacking in much of China, said Bob Honea, director of the University of Kansas Transportation Research Institute, who has visited China. “We’ll see this problem more and more often. It’s true of every developing country,” he said.

“Beijing’s already a big parking lot!” complained a taxi driver Gan during a traffic jam on the East Third Ring Road. “We’re making another Great Wall, it’s just that this one is made of cars,” he said.

In the worst-hit stretches of the road in northern China, drivers pass the time sitting in the shade of their immobilized trucks, playing cards, sleeping on the asphalt or bargaining with price-gouging food vendors. Many of the trucks that carry fruit and vegetables are unrefrigerated, and the cargoes are assumed to be rotting.

No portable toilets were set up along the highway, leaving only two apparent options — hike to a service area or into the fields. At several places, drivers, sick and tired of the snarl up, were bitter and angry as temperatures soared during the day and dipped in the nights. Many complained that local vendors were fleecing them for food and water, charging heavy rates, by selling water for 10 yuan as against 1 yuan.

The jam which some in Beijing say was not new in that particular section has also brought the spotlight back on China’s soaring auto sales. The congestion is set to peak in five years, when the total number of cars is expected to nearly double, the Beijing Transportation Research Centre said in its new report.

If people continue to purchase vehicles at the current rate of 1,900 new cars a day, the total will reach seven million in 2015 in Beijing alone, reducing average speeds in the city to below 15 km an hour, the report said.

By the end of 2009, Beijing had four million cars, a growth of 17 per cent over 2008. Experts say the urban layout forces people to buy cars and the city planning leaves people no choice but to travel.

In recent years, vehicle buying in the world’s most populous nation has gathered pace. China last year passed the US for the first time as the world’s biggest buyer of automobiles.

Car ownership is soaring fastest in China’s biggest and richest cities such as Beijing and Shanghai. About 650,000 new cars are estimated to be put on the road every year in the capital alone.

And construction of 15km of rail track is planned for Beijing’s Mentougou district this year, with a further 170km if it is successful.