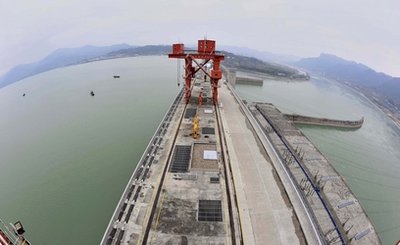 The Yangtze has long been China‘s famed attraction for cruises up the spectacular Three Gorges. There was much controversy when the government embarked & relentless touted on its humongous $23 billion hydro-electric dam project as the best solution to end centuries of floods along the mighty Yangtze & no less to boost & fuel China’s economic boom. It is now completed & generating electricity at full capacity. This is yet another China’s engineering feat.

In the construction process, millions have been displaced and great swaths of productive farmland sacrificed. Geologists have warned that damming up too much water in the reservoir carries a heightened risk of landslides, earthquakes and prolonged damage to the river’s ecology. Wary of such dangers, the dam officials will in the future maintain the water level, depending on flood-control needs, to within 100 feet (30 meters) of the maximum. 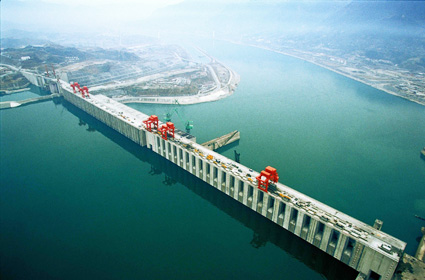 The Modern Seventh Wonder of the World?

The growth & surge in China’s economic development in the last three decades have resulted in many fields of human endeavour such as launching of three manned space flights, the building of the rail connection between Beijing & Lhasa across the high altitude of the Tibetan Plateau and embarking on building the nation’s network of high-speed rail, something which even US is without.

The staging of the very successful 2008 Beijing Olympics and the present mammoth Shanghai World Expo all add up to the enhancement of China’s international image & power to demonstrate its ability & managerial sophistication. While others stall in the wake of economic crisis, China roars ahead in building its infrastructures on an enormous scale.

This massive project will be remembered for the greatest number of people displaced (more than 1.2 million), number of cities and towns flooded (13 cities, 140 towns, 1,350 villages), and length of reservoir (more than 600 kilometers).

In the field of human endeavour, the race always go to the swift & the smart . . . for when you stall . . . others will roar!