Turn Your Disability to Victory

Do you look forward to your weekend round of golf, only to experience frustration, anger and disgust!

If so, the following story will fire you with inspiration and wild imagination!

The human body is a miraculous piece of biological mechanism capable of performing feats beyond your wildest imagination. Recently, I learnt from CBS of a young man by the name of Kyle, through the mishap of congenital birth was born without arms and legs, and yet is a champion wrestler. For the keen golfers, whether you are only a weekend player or playing more frequently, you might have heard of Dr David Gaudin, whose handicap, as low as 12, is now about 20. 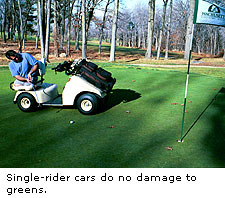 Such a handicap you might say is nothing worth emulating. However, David Gaudin was born without legs, and like Kyle, that hasn’t stopped him from playing the game he loves. Zeke Bratkowski, that old Chicago Bears and Green Bay Packers quarterback, a 5-handicapper at age 73, who’s been to places and seen lots of things, has this to say: “Dr. David shows how magnificent a human being can be.”

The amazing thing is that he uses regulation clubs and hits full shots from his stool with a conventional grip. He pitches, chips and putts from the ground. His best drives are low-trajectory fades that go some 200 yards to his target. He makes an uncommon number of putts inside 10 feet. This is what he has to say: ”We all do the best we can with what we’ve got.”

David Gaudin is 57 years old and has played golf since his Baton Rouge High School days, when a school buddy said. “Let’s get a stool.” Initially, David was falling off the stool and repeatedly getting on and was soon loving it. At Louisiana State University, whenever he and his buddy Walter Smith III were short on grocery money, they would look for golf opponents, or rather golf pigeons, eager to take advantage of a handicapped player with no legs. Smith might have negotiated three shots a hole because of David’s physical handicap – no legs and how could he ever play golf? At day’s end, two shots a hole were more than enough to feed the hungry college students.

David was born with a condition known as femur-fibular-ulna, a good-looking guy and everybody’s friend. He wrestles, plays football. With a torso of a 200-pounder, he bench-pressed 450 pounds, but they wouldn’t let him wrestle heavyweights saying he might get hurt.

Together with his wife Beth, a nurse practitioner, and four partners, they have 25,000 patients. Now a husband and father of two sons and step-father of a daughter, Dr. Gaudin drives most every weekend from Louisiana to Florida, where he pilots his 65-foot yacht and plays golf with whatever pigeons flutter his way.

2 thoughts on “Turn Your Disability to Victory”