Stature Square in Central is an ideal rendezvous for Filipino maids on Sundays when they have their day off. 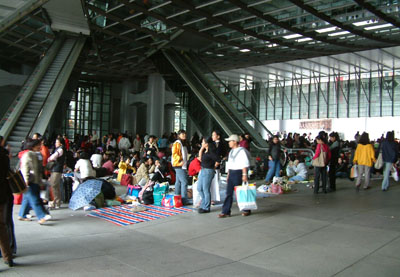 On any typical Sunday in Hong Kong, don’t expect to get a seat at the popular McDonald’s in Pacific Place. The whole place is swarmed with Filipino maids, just like they congregate in Central, also at the waterfront in Tsim Sha Tsui, Wan Chai area and most of the popular public places. Whenever you go to Hong Kong, try to visit Statue Square . . . it also serves as a place where hundreds of Filipino maids flock there to meet, to chat or to sing. They are everywhere. Never has such gathering been more evident elsewhere in Malaysia, Singapore or Taiwan – that’s because in Hong Kong, the maids work busily through the week and Sunday is their day of rest. On such a day, they go to church, socialize with their friends, lunch and dine out, do their personal shopping and attending to personal affairs, and then gathering together in groups chatting, singing or simply lazing around. Some of the large churches are largely frequented by them.

In Hong Kong, more than any other cities in Asia, this social phenomenon is to be seen to believe. These Filipino maids are a great export from developing Philippines. Their monetary remittances are much needed at home where unemployment or poverty necessitates the separation or sacrifice of the maids from their loved ones. In Hong Kong, they earn a good salary which contributes towards a better life at home. Most Filipino maids flock to Hong Kong because of the comparatively high pay and working condition.

Be not surprised that many a Filipino maid is college or university educated. Elsie (not real name) for instance is a qualified nurse with four college years of training and has been away from her family for 6 years now. Even as a nurse she won’t earn as much in the Philippines as working as a domestic help in Hong Kong. It pays for her to be away from her house husband and three children. She speaks and writes good English. In Hong Kong where Cantonese is the dominant dialect, she gets sparsely by with few essential words when doing her day’s shopping. With the family she works for, her English is an asset.

She would be the first to rouse preparing breakfast, getting ready the kid(s) for kindergarten or school to be followed by her daily routine of general housekeeping, shopping for the day’s meals and preparing them. A typical family she works for would be a young couple, both professionals, whose day begins at about 7.30 am and ends at about 8.00 pm or even  later by the time they get home. She is virtually in charge of the household in the absence of her employers with multiple duties and responsibilities – a cook, babysitter, and general household chores.

Her life is not entirely just that. Every now and again, particularly whenever her employers are off work or on holidays, she gets to be part of the family’s activities. She does benefit from the family’s outings to restaurants for “dim sum” or lunch/dinner and even on trips to Macau and other places of interest. For instance, Elsie is looking forth to going into China again with the family during the coming Christmas break. The pay is good and the variety of activities do compensate for her absence away from home. It was her birthday a few days before Christmas. Dinner with the family was followed by the cake at home with photo shots and video clips which she could forward and maintain contact with her own family.

With the growing affluence of the Asian families and where the extended family assistance is no longer available, such domestic service would be irreplaceable. Through a recruiting agency Elsie like other Filipino maids found her employers. Each contract is for a two-year basis. The initial first contact she would benefit for a two-year work permit and subsequently, she would need to leave Hong Kong after one year to get re-entry immigration extension of the other year.

In Hong Kong where space is a luxury and certainly pricy, she is fortunate, as some do, to have privacy in a room of her own with adequate storage facility and a small attached toilet. In some families, two maids are employed instead of one, each with specific duties. There’s a couple I know with three maids, but they have five children and are both business professionals. They have one maid just to drive the kids to school and back. One to cook and the third for general cleaning all three floors of their condominium apartment – combined, designed and refurbished into one luxurious apartment. They have even an additional driver specially for the gynaecologist husband. Once a year the maids’ highlight is getting the privilege to accompany the family on their overseas holidays and cruises. The affluence of the Hongkees does stretch on a great economic scale of needs. One would be a largely absentee employer because of her constant travel or another would be a single mother.

From time to time, we do hear of horror stories reported in the media relating to these maids of fighting, stabbing their employers and even murder. One particular horror story that I know was of a young and pretty maid infecting two equally young masters of the house with HIV through illicit sex. These stories however are far and few in between their tremendously needed household performance. Oftentimes, I notice there’s a clear good relationship between the maids and their employers .Extension of contract is often the norm with the same employer.

At the end of the day, all that is said and done, we each find the niche in the society we live in according to our skills and standings. If you like crowd and the hustle and bustle of life, Hong Kong has plenty of. On ordinary days, the shopping streets like Nathan Road or Mongkok area see crowd of people edging their way around. On Sundays Filipino maids have their preferred locations of congregation. If you’re getting home late by buses or MTR, be prepared to be hemmed in with them. Tagalog sounds pretty musical and clear above the drowning Cantonese dialect for once. Their day’s R & R being over, the crowd gradually all disperse like homing pigeons only to rise again happily for that busy day & week ahead.

Note: The Australian Government might well consider this worthwhile service and import such help in the Aussie households.