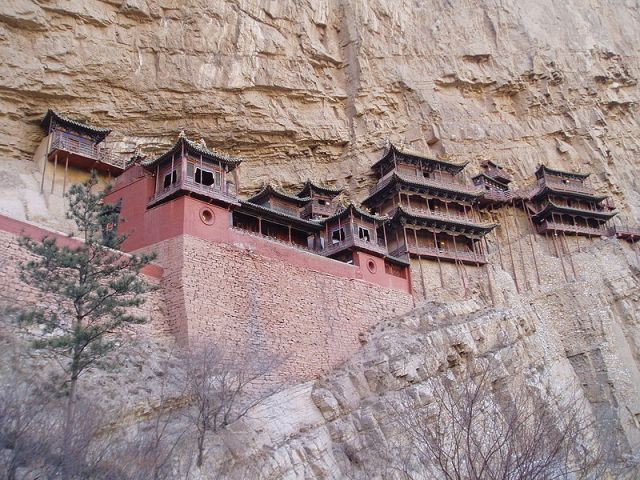 A distant view of the complex across the Golden Dragon River (Jinlong He). 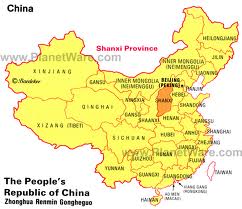 Built around 6th century, Xuangongsi of Hunyuan County, Shanxi Province is one of China’s unique and remarkable feats of architectural engineering. Sited about 50 mi (80 km) southeast of Datong, it is built about a third of the way up a vertical cliff in Jinlong Guan (Golden Dragon Gorge or Canyon), part of the long Hengshan (Heng Mountain), one of the four sacred Taoist mountains. The monastery was founded during the Northern Wei period (386-584) in the 6th century, although much was reconstructed from the Tang through the Qing eras, as well as in more recent times. 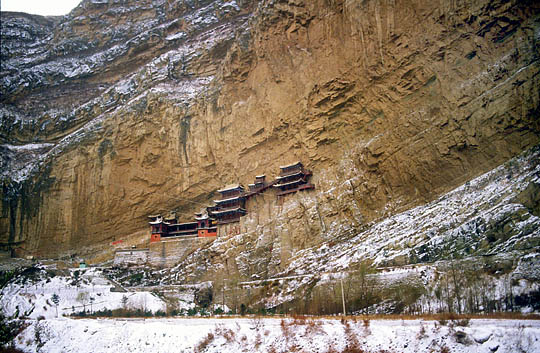 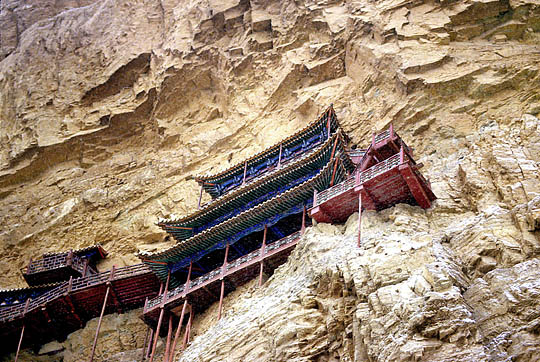 The underpinnings of the cliff buildings. 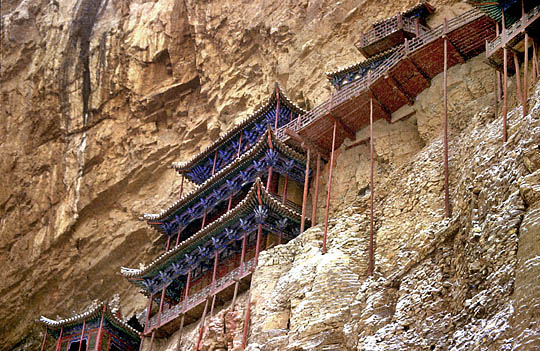 Little of the load is actually carried by the thin support pillars. Much of the cantilevering is supported by the weight of the buildings above it. 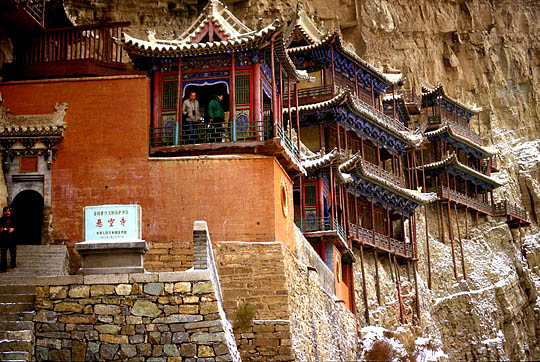 The complex consists of forty caves, or rooms, including six main halls, but its characteristic feature is the elaborate wooden façade of pavilions and walkways precariously resting on timbers jutting out horizontally and vertically from the cliff. There are colourful tiles on the roofs. Inside the caves are a number of Buddhist figures in bronze, stone, clay and iron. Although built on a sacred Daoist mountain, it has had many influences on it. The Three Religions Hall (San Jiao Dian) reflects the syncretic element of the Chinese religious and philosophical tradition. It contains the seated images representing the Buddha, Confucius and Laotzu, seemingly in perfect harmony with each other. 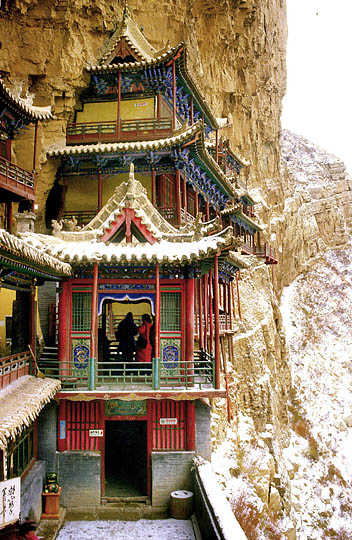 The Hanging Monastery is an architectural wonder to have withstood the stormy weather for this period of time. A unique mechanical theory was applied to building the framework. Crossbeams were half-inserted into the rock as the foundation, while the rock in back became its support. Seen from below, the Hanging Monastery appears to be a tumble-down castle in the air. Inside, it provides the same scene as other temples. 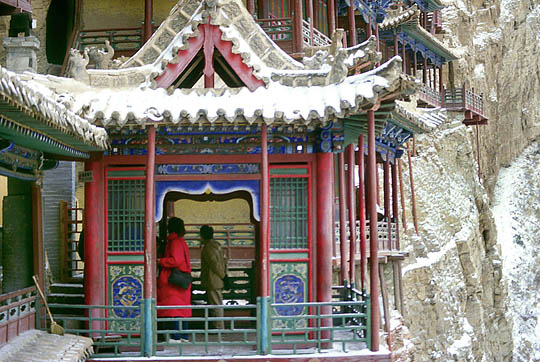 Construction experts from many countries including Britain, Germany, and Italy, have come to see the monastery. In their words, the Monastery, which mixes mechanics, aesthetics, and Buddhism, is rare. The monastery and everything it symbolises embodies a great cultural achievement of the Chinese people.

The second attraction of the Hanging Monastery is that it includes Buddhism, Taoism and Confucianism. Inside the Monastery, the sculptures of Sakyamuni, Confucius and Laotzu appear together, which is unusual. There are 40 halls and cabinets, which contain about 80 sculptures made of copper, iron, terracotta, and stone.

Why build a monastery like this? Location is the first reason – building a monastery on the cliff could shield it from floods. In addition, the mountain peak protects it from rain and snow; and the mountain around it also diminishes damage from long-time sunshine. The second reason is that the builders followed a principle in Taoism: peace & tranquility from all forms of human & natural pollution.