It’s possible to travel on a shoe-string in Japan because you can save heaps by staying in those “capsule hotels” – where there won’t be any room service but self-capsule service. The capsule, neat & clean,  usually in dimension of 3x3x6ft is all that is needed for you staying overnight in the middle of Tokyo.

Apart from the air-ticket fare, the bulk of the travelling expenses goes towards accommodation. 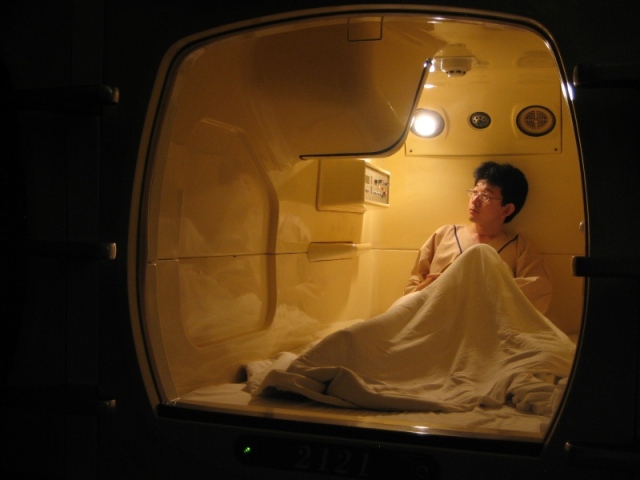 Such accommodation is modestly clean & safe. For 3200 Yen (about $30) you get a bed in a capsule cell, a capsule box incorporating TV/Radio & controls for volume, light switches. The facilities as provided by the hotel include inexpensive restaurant, massage rooms & baths. Washing/bathing & toiletries being all external & separate may be somewhat inconvenient.

At the entrance, you will told that you are expected to stay in until check-out time. They give you a suit of inner wear & a locker key. Most of these hotels accommodate male only, with the exception of some which have women-only floor. $29 is so cheap compared to what is usually charged $120 – $200 for a 3-star hotel in Japan.

Asakusa Capsule Hotel in Tokyo charges $30 for a capsule with a small TV incorporated with the alarm clock, Radio in a capsule box.

In Beijing, China the idea of the capsule-type of accommodation, known appropriately as “Capsule Apartments” has been introduced at the 2010 Spring Real Estate Fair recently. The new living spaces have attracted many people’s attention. Some say that they meet the demands of graduates who are not rich enough to rent a bigger suite. Hopefully, they would alleviate the problem of accommodating those millions of migrant workers who can ill-afford more expensive housing.

Each unit is less than 2 square meters and can only fit a single bed.

Huang Rixin –  designer and owner of the “Capsule Apartments” in Beijing.

“Those who earn one thousand to one and a half thousand a month can’t afford the rent for a single room, which may be 600. So I took out the money I saved over more than two years to build the capsule apartments. I hope it will be accepted by the public, and that the government will consider this issue and take it as a method to solve the housing problem of the floating population in the city.” said Huang. The 72-year-old retired engineer built 8 units of capsule apartments in Beijing. The monthly rent for each unit is between 200-250 yuan.

Huang had an open display of his capsule units and attracted its first tenant, 25-year-old Zhang Qi. The young lady has worked in Beijing for five years with a monthly salary of over three thousand yuan. She wants to save more money to help her family. Zhang says that the only inconvenience is the toilet and shower, because the bathroom is not on the same floor. But she felt she can overcome this if others can.

In places like Hong Kong & Singapore, where space is a premium, such neat capsules could be considered adequate at least temporary. To think of it, in the early days of Hong Kong, migrant workers used to share the same bed with sleeping arrangement alternating according to their work schedule.

Even the early days of Singapore HDB flats used to be nothing but cubicles, like pigeon holes! The same goes for Hong Kong where two in the kitchen is a crowd!

In Perth, we are indeed a fortunate lot with the luxury of space. But as with the enlargement & spread of urban sprawl & land becoming more scarce, the traditional quarter-size building lots are increasingly being squeezed to less than 400 sqm. However, single dwelling is much preferred to apartment type of dwelling.