Durian season in Malaysia & Singapore coincides  with most of the other tropical fruits such as mangosteen, rambutan, langsat & manggis as from June to August.

Durian is ‘King of the Tropical Fruits’, unique in Malaysia, Thailand, Borneo & some other South East Asian countries. It is utterly delicious described as “Smells like hell but tastes heaven.” Most Westerners shun the fruit because of its odour, strong & penetrating to the point of overpoweringly offensive. Most Asians however are hooked developing an insatiable urge for it.

Durian is distinctive for its large size, unique odour & formidable thorn-covered husk. Its shape ranges from oblong to round, the colour of its husk green to brown & its flesh pale yellow to red, depending on the species.

For those of us who have long migrated from Malaysia or Singapore, our urge for durians is secondarily satisfied by the Thai variety. The Thai durians somehow taste not quite as good, possibly because they are plucked or harvested before being ripened, freight overseas & stored in frozen form. In Malaysia, only fallen ripe durians are harvested & marketed & they are really rich in taste & aroma.

These days genetic durians are available throughout the year. The imported D24 genetic variety is pricey here in Perth. As they are also in frozen state, they don’t come up to the same mark of deliciousness. 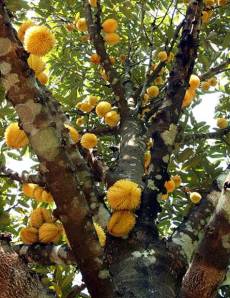 (The Red Variety as found in Kalimantan)

In SS2 Petaling Jaya, Malaysia, there are stores promoting eating durians in buffet style. For R$10 customers can feed themselves as much as they can eat. This is definitely good dollar value for a durian dinner.

Traditionally the durian fruit was seen as a powerful aphrodisiac, while women would eat the ashes from burnt durian skins to help them recover after child birth. But concoctions made from the leaves of the durian tree were also used to help reduce swelling and cure skin disease. More recently nutritionists have claimed that the durian fruit can help lower cholesterol andcleanse the blood as well as cure jaundice and alleviate fevers.

Experts even say that you can rid yourself of yeast infections such as thrush through eating the durian fruit. This is because of the durian’s high iron content that helps the white blood cells in our body make specific chemicals that kill off the infection.

The durian is also packed withamino acids as well as Vitamins B, C and E and many people are even comparing the sweet custard like centre of the durian fruit to the goji berry for its high levels of anti oxidants. These anti oxidants help slow down the destruction of cells from free radicals such as pollution and smoking; in doing so, they decrease the effects of aging on the skin giving you a younger more refreshed look.

Among the amino acids found inside the durian is tryptophan. Tryptophan is essential for making and maintaining serotonin levels in the body. Serotonin is the hormone in the body that regulates our happiness. People with low serotonin levels tend to have short tempers, are often moody and suffer from depression. This means that not only will eating the durian fruit help keep your body running smoothly but it will also increase your general happiness and well being.