We are all living in a turbulent & volatile world. The threat of Hiroshima-Nagasaki nuclear destruction on August 6, 1945 by US looms & dooms in our hearts & minds & may happen again if politics, in the name of world safety & security, sadly takes on the trigger-happy finger. This time around it could mean global annihilation.

Ever since the end of WW2, US has been confronting & threatening DPRK. Inevitably this has led to the defence build-up of the little nation. As in ancient time the sword was no match to the gun, I believe DPRK just got to equip itself with similar or greater arsenal of WMD (the infamous Weapon of Mass Destruction of George Bush).

Pretty sure both parties want peace & harmony, but not just by rendering verbal convention without any positive or genuine means of reconciliation. Economic sanctions, verbal threats etc have failed to bring about any political solution. It’s been a long drawn “ding-dong” game between “David & Goliath”.

As a layman, I think that if all else failed, political conflict could be solved through the field of human sporting arena, where there is no political constraint or hidden agenda, suspicion or mistrust. It’s all open & transparent. Everything depends on the question of sporting skill to gain supremacy. Both victors & the vanquished take the results in the spirit of sports. Clubs & nations are prepared to pay hundreds of millions to sign on top soccer or basketball stars.

Come to think of it, instead of having just the Summer or Winter Olympics once every four years, I recommend all sporting nations to participate in “PING-PONG OLYMPIC”. It’s a cheap game to organise . . . ping-pong tables, nets & balls. I see less hassle, most in terms 0f expenses & seasonal convenience.
China, the supreme nation in the game, could start the ball rolling. The Chinese could very well outreach to Taiwan in bringing about the political reconciliation & unification via the game they both love & play well. The Japanese, the Koreans & other Asian nations are all equally good & skilful in this game . . . not forgetting the Europeans or the Americans. 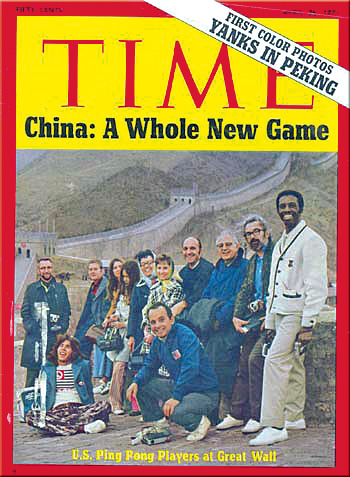 Many of you can recall  the exchange of table tennis (ping-pong) players between the United States and People’s Republic of China (PRC) in the early 1970s. The event marked a thaw in Sino-American relations that paved the way to a visit to Beijing by President Richard Nixon.

Let’s thaw all our political conflicts through the simple Ping-Pong. Unlike the American football where injuries are so prevalent, this is a delightful simple game, like tennis or badminton, yet providing thrills & spills, energy & excitement, quickness & agility, brawn & sweat without the dispense of brain.