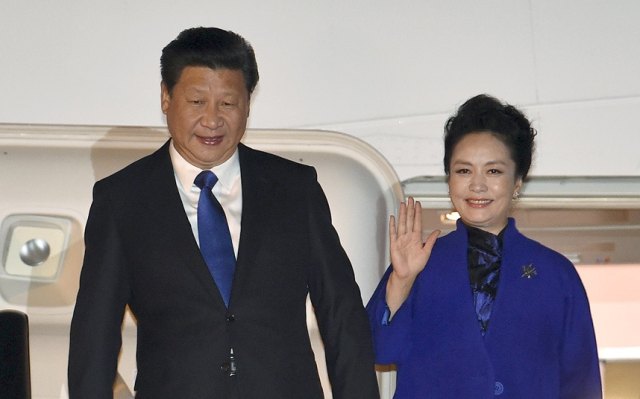 Jacky Kennedy, the once famous US First Lady, got to the White House through her camera. Peng Liyuan attained her envious position as the First Lady of China through her beautiful soprano voice.

It’s a rare occasion & privilege to listen to her rich soprano voice which captured the heart of President Xi Jinping, leading her to be the First Lady of China. Together they have a daughter named Xi Mingze (习明泽) born in 1992, nicknamed as Xiao Muzi (小木子),
reading law at Harvard. Peng has been married to Xi Jinping for over 25 years.
Today she sings no more (perhaps in the privacy of home or bathroom). A most gracious lady who tours with her husband meeting up with foreign dignities.

Peng Liyuan, a native of Yuncheng County, Shandong province joined the People’s Liberation Army in 1980, when she was 18 years old, and began as an ordinary soldier. Because of her vocal talent, Peng later performed during frontline tours to boost troop morale during the Sino-Vietnamese border conflicts.

Peng, a national treasure (like the panda), quickly learned to sing patriotic songs and, as a skinny 15-year-old teenager, she beat 10,000 other applicants for a place at her provincial art school. From there on her career progressed by leaps and bounds. First she was picked for the elite performance troupe of the local People’s Liberation Army.

Then she attended the Conservatory of Music in Beijing. According to the state media, she was a “three points and one line” student, meaning Peng’s daily life then only had three points – the music room, the canteen and the dorm.

Peng first performed nationally and came to fame during the earliest rendition of the CCTV New Year’s Gala in 1982, when she performed On the Plains of Hope.

On November 20, 2014, Massey University in New Zealand conferred Peng an Honorary Doctorate in recognition of her international contributions to performing arts, health, and education.