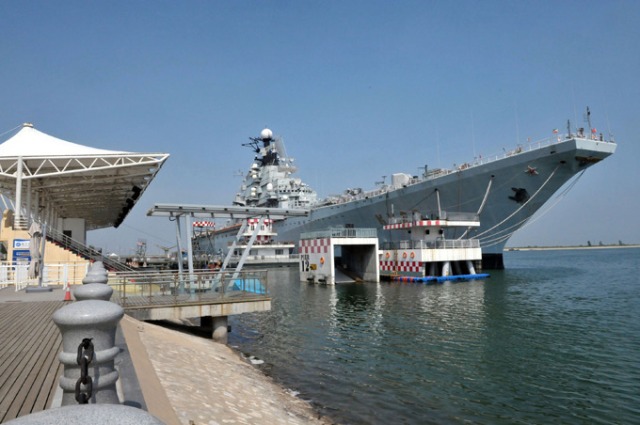 The Kiev, a 1,000 foot vessel, once the pride of the flagship of the mighty Soviet navy’s Pacific fleet (first began December 1972), serving them well for almost twenty years, as well as being able to hold more than a thousand crewmen, she could be loaded with dozens of missiles – some nuclear-tipped.

But now the Kiev is leading a much more sedate & humble life . . . available for business retreats, intimate getaways or simple relaxation (without actually getting away). That’s because the Chinese have bought the aircraft carrier and transformed her into a floating luxury hotel, the world’s first luxury aircraft carrier hotel, costing $15 Million.

It’s strange to think that a ship that was once a weapon of war is now a place of relaxation and fine dining.

The Kiev will stay permanently docked at theTianjin Binhai Aircraft Carrier Theme Park. Much as a Soviet-era sailor might resent the indignity, Kiev won’t go back out to sea. She’ll entertain guests and clients at anchor, a bizarre museum to a different country’s naval power. Guests will relax with Western-style cuisine in ornate luxury suites, dreaming of Chinese seapower.

Sold to Tianjin International Recreation Port in 2000, the Kiev has been refitted, furbished & transformed into a world-class floating hotel with 148 room – including two presidential suites, three VIP guest rooms and 137 standard rooms. Since it was purchased over a decade ago, the Kiev has also been upgraded with a luxury restaurant – something the original crew would have no doubt killed for.