The world celebrated World Food Day on October 15 with the shocking news that around one thousand million or a billion people won’t have enough to eat. There would be nothing to place on the table for the hundreds of millions of poor children around the world . . . simply because greed, that evil five-letter word, works against their favour.

Last weekend, UN Secretary-General Ban Ki-Moon stated over the satellite TV that “the world’s food system are not working in ways which ensure food security for the most vulnerable members of our societies.” It all boil down to just one thing that “Money is not the root of all evils, but GREED is”. Money is necessary in this capitalistic world for living & surviving. Greed however works counterwise & affect the most vulnerable sections of our societies. Being poor is one thing, but to be further deprived of the very little in existence is humanly cruel!

Future prospects of the global situation are further aggravated by the climate change across vast swathes of the developing world where two billion people depend on their smallholding farms. The global outlook is nothing but bleak!

Nature can also be cruel to add on to the worsening situations such as the earthquakes in Haiti, the floods in Pakistan and the drought in Sahel.

Malnutrition, freedom from from hunger are not apparent to the eyes of Greed, which in fact further exploit the situation. It is a cruel world to be living in. The “haves” are having in excess, the poor simply look on with pity & pain of living hell.

The rich nations do very little by way of reaching & helping out. The works of UNO are but window dressing acts & barely scratch the humanity surface. Pictures of the deprived & malnutrition are graphic indeed and speak louder than ten thousand words. Where is real help coming from? Manna from Heaven? 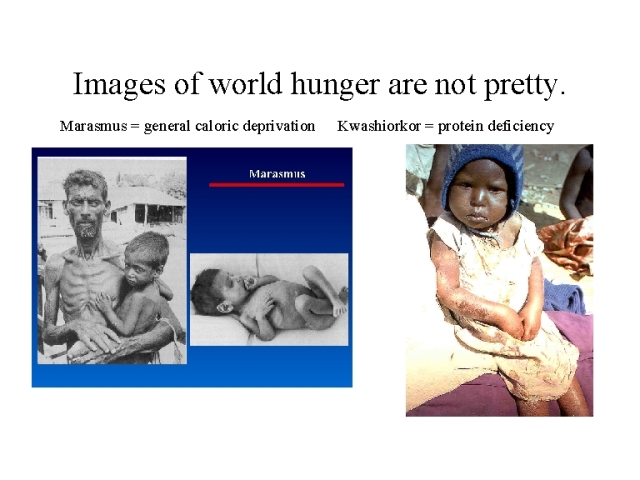 Globalisation, the concept propagated by the rich nations, supposedly designed to help out less fortunate nations, is contrarily working against them. In the words of World Food Programme Executive Director Josette Sheeran that hundreds of millions of children will live unfulfilled lives “simply because they have had no access to nutritious foods.” What’s wrong with the UNO food distribution? Corruption? Bad policies? Poor administration or what?

In a word, nothing can work where GREED exists. Capitalism & globalisation work well for the rich, with the rich getting richer and the poor getting poorer. With land speculation, even the very basic factor for growing more food is drawn towards other more enterprising & profitable ends.

is the unwanted word!

Malnutrition & hunger-related diseases cause 60% of the world’s death.