Diagram comparing the height of Burj  Khalifa to other towers & structures

The Burj Khalifa, originally named Burj Dubai, and currently the tallest tower in the world, officially opened in Dubai on Jan. 4 2010 amid an impressive pyrotechnics display that highlighted the tower’s 2716.5-feet of aluminum and steel, and its 26,000 hand-cut glass panels. The Burj Khalifa blows away the next-nearest skyscraper, which is Taiwan’s 1670-foot Taipei 101, and the building has even surpassed ultra-tall, ground-cable-supported radio antennas. 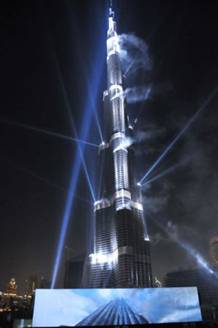 Architects’ vertical leapfrogging, however, isn’t likely to stop at the Burj Khalifa. While the tower will be a tough one to beat, it is likely to remain at the pinnacle for only about another half-dozen years. Developers around the world have proposed numerous new skyscrapers. Some projects have leapt off the drawing boards, though plans for many record-breaking towers have been scuttled because of the global economic spasms of the past couple of years.

So what buildings could be the next to rise up and steal the Burj Khalifa’s crown? Here in the chart below are some of the tallest towers that have been dwarfed: Taipei 101 (Taiwan) as mentioned, Shanghai World Financial Centre (China), Petronas Towers (Malaysia) & Sears Tower (USA). 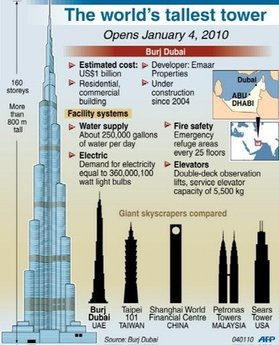 Waiting to compete for the prized crown are eight more on the drawing board:

One thought on “The World’s Tallest Tower”