As a little boy in school those days, we had singing lessons & a song book entitled “Sing & Be Happy”. Somehow, my singing teacher didn’t like me, kept discouraging me to sing saying that I had a croaky voice. Nevertheless, where love exists desire persists! Though I am never good at it, music & songs fill my life . . . make me as happy as can be!

I was born in Malaysia, brought up there, had my schooling there, sent on a government scholarship for teacher training in UK & then furthering my tertiary education at the University of Malaya, Pantai Valley, Selangor. That’s how it was . . . down memory lane in Malaysia . . . no political divide, no racial strife, tension or envy, peaceful & harmonious living . . . a land known invariably as “The Golden Chersonese”, where music flow & songs galore!

Songs have no cultural or political overtone attached. Music as such is a universal language. There is but one tongue . . . the musical tongue. Songs like “Rasa Sayang” & “Bengawan Solo” have always inspired listeners the world over. The other day, I was with some Aussie friends chatting & having a bit of wine. John who owns 6 bands related to me that when his band was playing in Penang, Malaysia, he learnt to play and sing that ever popular request “Rasa Sayang”. He just loves it! The favour of the song will always live on.

Another song that comes to mind is “Bengawan Solo.” When teaching in Kelantan, North East Malaysia, I remember Zainab a Malay student of mine who rendered this song beautifully. I learnt it then & I sing it even now. In most karaoke parties I have organised, “Bengawan Solo” never failed to show.

There’re various translations to this song . . . English, Filipino, Burmese & others.

Teresa Teng (Deng Lijun) the ever popular nightingale from Taiwan, sadly passed away at the age of 42 in the year 1995. She captured the hearts of men & women all over the world with her songs. There was a saying then “The day is dominated by Deng Xiaoping, but the night belongs to Deng Lijun”.

Any karaoke fan would love “Tian Mi Mi” and “Yue Liang Dai Biao Wo De Xin” (The Moon Represents My Heart) as sung by Teresa Teng. My former HSC student Kat sings it beautifully in Mandarin . . . & she is Malay! My own wife Lilian sings the English translation version. However, it’s hard to get her to render it in public except small karaoke party. She sings well but fights shy of public swell!

Incidentally, best way of learning a language is through the song in that langusage.

And lest we forget the memory of Deng Lijun (Teresa Teng), who has been commemorated in a public garden park in Taipei, Taiwan, let’s listen to her melodious captivating voice: 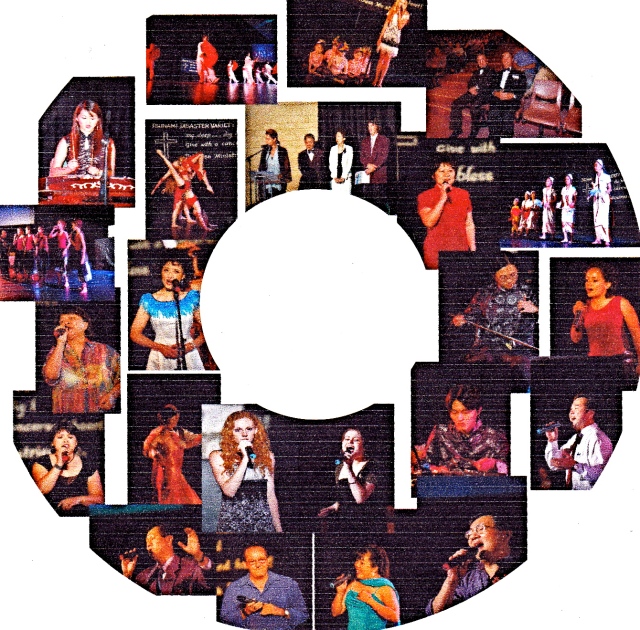 A Galaxy of Stars

“My soul will be satisfied as with the richest of foods; with singing lips my mouth will praise you.” – Psalm 63:5

( The word “Psalms” come from the Septuagint which is the Greek translation of the Old Testament where it originally referred to the stringed instrument like the harp, lyre and lute and then to songs sung with their accompaniment.)

Biblically, the word “sing” occurs some 32 times, most frequently being in the Psalms. For the romantics, you are probably more familiar with this saying “if music be the food of love play on.” It ‘s been said too that a merry heart is good medicine for the soul. No doubt, music has a way of melting even the most savaged hearts and changing lives. Therefore, sing and be happy!

Karaoke is a Japanese tradition, which has come to capture the minds and hearts of men all over the world. The Japanese word “Karaoke” literally means “empty orchestra”. The pastime has become so popular that it is listed in the latest editions of both Japanese and English dictionaries.

China is a singing nation. You’ll only have to watch CCTV on satellite TV to astound yourself with the galore of singing stars, both amateur & professional, young & old, vying to be heard. Just about everyone sings! From the pure basic home entertainment, bars & the stage, singing range from the traditional folk or classic, modern tunes, pop & rock to the very classic of Eastern & Western opera. Whenever & wherever festivals reign, singing grips the mind & hearts of people without restrain!

Karaoke is the ultimate “family friendly” form of entertainment. No doubt it is prevalent in bars and taverns and restaurants, especially some Chinese restaurants. Anyone can sing along to karaoke. A wide range of songs and music are available with lyrics and tempo indication to guide you along. Karaoke is always good for a laugh if you are plain amateurish. Some Karaoke singers are really “professional” and as with a few doctors and dentists known to me, they not only sway your hearts and minds but also provide you with something that no medicine can buy!

Often home parties are lavished with delicious home cooked foods and the rotation of hosting such parties, eagerly awaited for, is unending and more frequent than your social calendar can hold. With good food, good fellowship and good entertainment, what better alternative is there? The very serious enthusiasts go for voice training and professional coaching. We are never short of talents comparable to such singing greats as Teresa Teng, Anita Mui or Elton John and Elvis. For the more conservatives, Pat Boone, Nat King Cole, Perry Como, Tom Jones, Cliff Richard and others are among the favourites. Some home groups like to sing Mandarin or Cantonese songs while others are more inclined to sing in English. Tribute must also be given to the Filipinos, the Burmese and Karens and Indonesians, for they’re known traditionally to be more singing oriented.

With the affordability and availability of DVD players, karaoke has come a long way from Japan’s Kobe City some 20 years ago . . . from long playing tapes, cassette tapes, big laser discs, VCDs to DVDs. Who knows what the future has in store with the rate of technological advances and computerisation.

Karaoke is good clean fun – an enjoyable form of cheap entertainment. It is an excellent way of bringing people together and keeping families together. Get goofy and sing off-key! Who cares! But just don’t “expire” and be interred with your bones with the best music waiting to be sung! You may yet be a singing great waiting to be head hunted by talent scouts from Hollywoods!

My only lament is that there is a lack of good Christian Karaoke VCDs or DVDs. Churchgoers sing in churches and when at home singing stops. You should have no fear or qualm singing to the LORD, for He loves you singing praises unto Him, just like King David did. Yes, sing to the LORD with a new song!