Alexander, after conquering many kingdoms, was returning home. On the way, he fell ill and it took him to his death bed. With death staring him in his face, Alexander realized how his conquests, his great army, his sharp sword and all his wealth were of no consequence.

He now longed to reach home to see his mother’s face and bid her his last adieu. But, he had to accept the fact that his sinking health would not permit Him to reach his distant homeland. So, the mighty conqueror lay prostrate and pale, helplessly waiting to breathe his last.

He called his generals and said, “I will depart from this world soon, I have three wishes, please carry out them out without fail.”

With tears flowing down their cheeks, the generals agreed to abide by their king’s last wishes.

“My first desire is that”, said Alexander, “My physicians alone must carry my coffin.”

After a pause, he continued, “Secondly, I desire that when my coffin is being carried to the grave, the path leading to the graveyard be strewn with gold, silver and precious stones which I have collected in my treasury”.

The king felt exhausted after saying this. He took a minute’s rest and continued. “My third and last wish is that both my hands be kept dangling out of my coffin”.

The people who had gathered there wondered at the king’s strange wishes. But no one dared bring the question to their lips.. Alexander’s favorite general kissed his hand and pressed them to his heart. “O king, we assure you that your wishes will all be fulfilled. But tell us why do you make such strange wishes?”

At this Alexander took a deep breath and said: “I would like the world to know of the three lessons I have just learnt.

Lessons to learn from last 3 wishes of King Alexander…

I want my physicians to carry my coffin because people should realize that no doctor can really cure any body. They are powerless and cannot save a person from the clutches of death. So let not people take life for granted.

The second wish of strewing gold, silver and other riches on the way to the graveyard is to tell People that not even a fraction of gold will come with me. I spent all my life earning riches but cannot take anything with me. Let people realize that it is a sheer waste of time to chase wealth.

And about my third wish of having my hands dangling out of the coffin, I wish people to know that I came empty handed into this world and empty handed I go out of this world”.

With these words, the king closed his eyes.

As with all mighty kings & conquerors of the past, death ultimately subdued them all.

Life is ten percent what you make it and ninety percent how you take it! 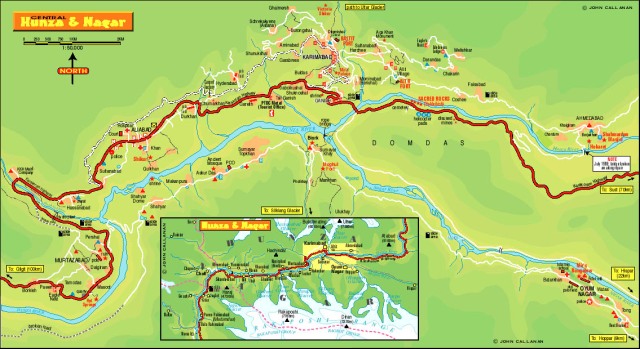 The Hunza Country with a population of some 30,000 is situated at the extreme northern point of Pakistan/India, where the borders of Kashmir, China, India and Afghanistan converge. It’s a mountainous valley in the Gilgit-Baltistan autonomous region under the control of Pakistan government. The Hunza people or Hunzakuts are ruled by a Mir (King). It has been reported that a significant number of the Hunzakuts have survived to the incredible age of 145. Among these people centenarians are common.

According to reliable sources, it is not uncommon for a 90 year-old Hunzakut to father children.

These people were purportedly to have been descended & associated with Alexander the Great. Three generals in his army were said to have married Persian women. The generals betrayed Alexander by giving the Persians his plans. The generals, wives and a band of many soldiers fled when this was revealed. The valley of Hunza is thought to have been their valley of refuge because of its remote and secure location.

I first came by the above essential information some years back when researching on the question of longevity.

I cannot personally vouch the truth & validity of it all. This sounds too incredible. There’s such an abundance of information circulating in cyberspace today that before assimilating & accepting any you really need to research further. Also refrain from asking others, for opinions are about the cheapest commodities around, freely available.

This will be a worthwhile exercise to stimulate your mind, to energise & rejuvenate towards your own attainment of youth & longevity. Most people generally are gullible & accept anything in print as the Gospel truth, and yet ironically fail or reluctant to accept that which are written in the Holy Book.

In your quest for the truth, consider the following:

It would certainly be good to be able to live right up to 150 & beyond, still young, active & virile and able to father children at age 90. It’s said that truth sometimes is stranger than fiction, and often too that fiction is mistaken for truth.