Introducing our granddaughter Stephanie Chong who at a tender age of 10 writes with the skill far beyond her age. She reads voluminously, plays the piano, smart & most creative. 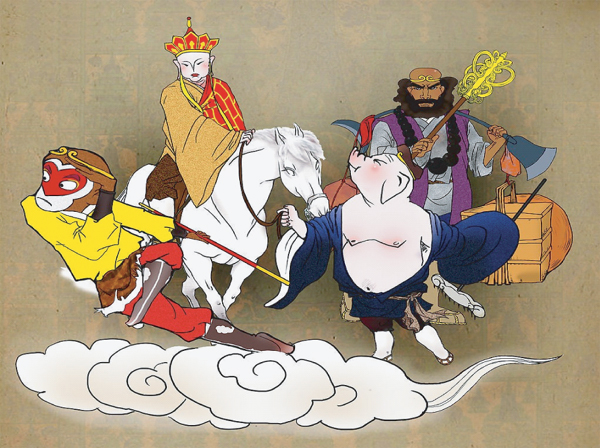 Life is so boring here, “Sun Wukong grumbled as he lay sprawled on the ground, scratching his furry belly, “can’t we do something other than sitting here all day?” he pleaded with Xuanzhang who promptly shot the monkey a stern look that made him bolt upright.

“Well, what would you suggest?” Xuanzhang sagely replied. In response, Sun Wukong grunted & slumped back down, “I miss the old days,” he thought wistfully. At that moment there was a curt knock on the door. Hastily, Sun Wukong scrumbled to his feet. Maybe whoever was knocking at the door has something interesting to share, something more interesting than sitting on the tiled floor of the temple . . .

Outside he found one of the dutiful servants of the King of Heaven. “His majesty would like to inform you that your next mission is to help the citizens of Hong Kong.”

Their visitor then went on to describe the dire situation facing those people in the city who were forced to reside in cramped subdivided flats, and that the monk & his disciples were tasked to find a way to help them. Instantly, Sun Wukong bounded out of the temple & on the way to find the rest of their troop.

Sha Wujing stood bewildered, his mouth hanging open as Sun Wukong leapt around him in excitement, waving his staff wildly.

“Come on! We have a new mission,” he exclaimed with a screech.

Nearby Zhu Bajie, the greedy pig, was blissfully stuffing food from the alter into mouth as fast as humanly possible, taking no notice of the commotion that was going on around him. Before either of t5hem could protest, Su Wukong grabbed both of them & grabbed them out towards XuanZhang who was perched atop a waiuting cloud.

Soon after, the four were descending towards the sprawling metropolis of Hong Kong. Gently the cloud carried them through the window of a crumbling apartment building. What they saw bamboozled them. This sparsely-furnished room that felt no bigger than a postage stamp 2as surely too small to be somebody’s living quarters. just then the door opened & a skinny girl dresed in a school uniform. When she caught sight of the four she stopped dead in her tracks.

“Who are you?” she stammered, confused. Xuanzhang smiled awkwardly before introducing himself & his posse.
“I’m Alice, the girl whispered.
“Why are you living in this awful place?” Sun Wukong blurted out as Sha Wujing elbowed him in the ribs.
“At least this one has a bathroom” she replied. “My family & I are being kicked out next week because we can’t pay our rent!” she whispered & wiped away her tears before adding, “We’ll have to live on the streets!”

At once they sprung up to life & Zhu Bajie exclaimed. “Don’t6 despair! It is our honour to help you!” Alice gasped in wonder as one by one they climbed the wispy cloud & were soon whisked off to Government House.

“We do have one possible solution,” Carrie Lam stated. The four soon learnt from her that, rather bizarrely, houses could be made out of those funny big metal boxes they’d see piled high on gargantuan ships as they passed over the South China Sea. And the best part was that they took up so little space. What6 an ingenious idea! Furthermore, the Government of the Netherlands has agreed to provide them for free, but on the one condition that Hong Kong could show evidence that they possessed sufficient land. Fortunately Sha Wujing recalled spotting a seemingly deserted island not far from Hong Kong. There was only one thing for it! The four clambered atop their cloud again eager to depart for Amsterdam.

Much to their delight, the gang soon glimpsed the mysterious island. But was it claimed? As they descended to have a closer look, they were rudely greeted by a rotund man who shook his fist & then proceeded to hurl rocks at them. “This is my island & you’re trespassing!” he bellowed as he leaned against a rusty faded sign declaring “Property of HKSAR Government” to catch his breath.

“We’ll see about!” Sun Wukong muttered under his breath to his friends as they took off back to the clear blue sky.

After a long & arduous journey, they finally arrived at the city of canals & bicycles. Upon hearing of their fantastic plans, the Government agreed at once to provide the valueable containers. The clouds above them changed from wispy to round & puffy & came to form one big cloud. They loaded the containers on & Xaunzhang expertly wound miles of rope to secure them. Proudly, they climbed on top ready to return to Hong Kong

“Homeward bound!” Zhu Bajie snorted. The clouds seemed to huff & puff as they retraced their journey. They travelled day & night with no rest with the exception of Zhu Bajie who collapsed against an annoyed Sun Wukong, drooling & wnorting loudly.. After three days they finally reached their destination!

“Drop the containers!” cSun Wukong boldly commanded. They seemed to rain down like a meteor shower & amazed citizens young & old pressed their noses to their windows to see what was going on. The containers plunked down onto the sandy shore of the island, & best of all, the greedy little man! At the sight of this, Sun Wukong cheered. He certainly gotten what he deserved. As it by magic, all the televisions in Hong Kong cracked to life. Even before Carrie Lam could finish proudly declaring that those in subdivided flats had been gifted with new bigger & better accommodation, cheers & whoops could be heard across the territory. A stampede of grateful families outside ahd, one by one, the container houses were rightfully claimed. In the crowd Sun Wukong spotted Alice& her family weeping tears o joy. He grinned to himself, glad to have made a difference to their lives of those less well-off.