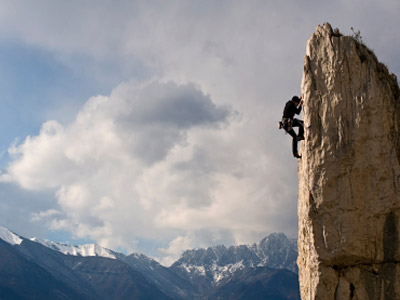 “For the word of God is living & active. Sharper than any double-edged sword, it penetrates even to dividing soul & spirit, joints & marrows; it judges the thoughts & attitudes of the heart.” ~ Hebrews 4:12

Whatever you wish to achieve or conquer it begins first in your mind, which comes about as a result of your feeling. So how do you feel about thingsor situation will determine largely the outcome of your action. Let’s illustrate this by a parabolic story.

Pastor Paul was deep in prayer & thought preparing for his sermon due for the following Sunday. He needed the peace and quiet to concentrate and kept himself in his study away from his wonderful active son, David.

However, this was not to be, for David was particularly most disruptive that afternoon. He kept coming and going out of his dad‘s study. “Dad, how long more before you could play football with me?” Dad assured him, “Not long son. Just give me some time to do my work. Don’t disturb me & I’ll be with you sooner than you’d realise.”

The beautiful afternoon was fading fast, so the boy thought. He was getting impatient as would any other youngster. Pastor Paul too was getting pretty annoyed. The father soon thought of a ingenious plan to keep his son occupied. “Hereson. This is a jigsaw puzzle of the world that we live in. You go quietly into your room and piece them altogether. By the time you finish, I’ll brfinished and we can then play. Agree?”

“Yes, dad,” and he left reluctantly. “At last I shall have the peace to complete my sermon,” thought the jubilant father.

It seemed that David was hardly gone before he was once again standing happily in front of his dad presenting the finished jigsaw puzzle and was eagerly waiting for his reward. Taken aback, the father said, “You are a smart little fellow. How did you manage to finish it so quickly?”

Yes. That’s it! Set the man right and the world will be right! In any situation life, solutions are easy enough to find, and often it tantamount to just setting right the person involved. Whether it is a personal situation or a national one, for example, the country will be right when the politicians are set right. The next Sunday morning, Pastor Paul delivered one of his best sermons yet.

Problems are brought on & about by people in the way they feel, think

and accordingly act that will determine the outcome of any situation.

Let’s see what the Bible has to say on the magic word “attitude”:

“You were taught, with regard to your former way of life, to put off your old self, which is being corrupted by its deceitful desires., to be made new in the attitude of your minds; and to put on the new self, created to be like God in true righteousness and holiness.”

“Your attitude should be the same as that of Christ Jesus.”

Your attitude will determine your spiritual well-being, as you can see. In the practical sense of our daily living, let me just show you what I mean by that “magic word”:

Take the case of two top flight sales-executives in Singapore. Tom had all the excellent academic credentials that secured him the job in the first place, whereas, Dick, was, as we say, “a street-wise kid without the privileged benefit and luxury of a tertiary education . . . a self-made man, a fighter and survivor.

When their company “Modern Bra” was gearing to set up a distributorship in Sabah (present East Malaysia), these two sales-executives were sent to survey the market. Off they flew and checked into a five-star hotel . . . good food and entertainment and all those wonderful commercial perks.

The week went past soon enough. Tom was the first to departed upon landing went reluctantly to report to his general Manager. “Sir,” he said, “personally, I don’t think it’s feasible to go ahead with the project in Sabah. All those native women and others don’t wear bras. They prefer to bare their bosoms.”

Dick however was very excited upon his return and even the General Manager could not contain his excitement & enthusiasm. He virtually shouted out his words, “Sir, what a golden opportunity we’ll have in Sabah. Hundreds and thousands of women there simply don’t wear bras!”

Well, he was of the opinion that all it took was to teach them the benefits of modesty and beauty of enhancing their physical appearance through the wearing of bras. The potential of that market was there waiting to be tapped!

So, who is likely to be promoted? Tom or Dick?

Well, what is the level of your spiritual growth? Are growing old or growing up? Are you scaling the spiritual altitude? It all depends on you. You can make it happen or you could sit and stare and wait on the outer comfort zone. Grow up and grow tall, for the spiritually weak will not be called, instead to them the devil will roar!

You hold the key to your own spiritual door which can only be opened by you from the inside. Jesus is knocking upon your door. You have to open it. He’ll not force His way in. He’ll come *& dwell in your heart and make you a new person, if you allow Him.

In the light of this, allow me to just share with you a poem. I simply like to express myself poetically, benches I can do so concisely and precisely with the minimum usage of words and the greatest expression of meaning. You have heard of the famous “Footprints” but here is the “Butt-prints in the Sand’:

(A parody of Footprints in the Sand)

One night I had a dream

I dreamt I was with the Lord

We were on the beach

So blissful and at peace.

As I looked back along the sand

Only one set of footprints was seen at length

Along the way were also buttprints

Instead of another set of footprints.

Puzzled, I asked our Lord

“Even if I was being carried, Lord

Shouldn’t there be just one set of footprints?

But why there a set of buttprints?”

Our Lord looked at me with much compassion

Stretch out His arms with elation

“Not only you refused to walk with me,

You slept on me and was so lazy.”

“I tried to motivate you without avail

So I struggled on along the trail.

I got quite tired in the end

So I set your butt down on the sand.”

Wait till I am retired

Wait till I have solved my problems

Wait till I am Free

Right now I am too preoccupied!

RIGHT NOW IS THE TIME – FOR THERE IS NO OTHER TIME.

Time is but an illusion

It expands and contracts

To suit your own convenience.

Accept the Lord and be saved! Amen.

* (This article was written on 26 June 1999 and first delivered by P Chong as a sermon to a small church gathering of Potbless Ministries Inc.)