. . . where the ancient flourishes

Hu Jintao, President of China, advocates “living harmoniously” and there’s no better place where the slogan is deeply rooted in the daily lives of the people. In Dali – an ancient town in Yunnan China, there’s a good cultural mix of different ethnic groups – Han Chinese, Bai & Naxi minorities and many others, all living in peace & harmony.

Ancient Dali lies within the ancient walls where the old way of life still flourishes, while modern Dali sprawls & spreads outside the protective walls – north, south, east or west.

Yunnan is noted for its very high level of ethnic diversity. It has the highest number of ethnic groups among all provinces and autonomous regions in China. Among the country’s fifty-six recognised ethnic groups, twenty-five are found in Yunnan. Some 38% of the province’s population are members of minorities, including the Yi, , Hani, Tai, Dai, Miao, Lisu, Hui, Naxi, Lahu, Va, Nakhi, Yao, Tibetan, Jingpo, Blang, Pumi, Nu, Achang, Jinuo, Mongolian, Derung, Manchu, Shui, and Buyei. All of them are educated in Mandarin & speak Mandarin fluently.

The current popular tune of “Darling, darling . . . darling na” (not sure of the song title & I am just going by the sound) flowed through the narrow cobble-stone streets as we wandered around. I learned that the soothing song was sung by a Naxi girl who first rendered it to be popular in the local tavern of Dali. My brother Mike bought me a copy of the CD seeing that I was so captivated by the tune.

I guess the beautiful catchy tune took the hearts of most visitors & tourists, who were mainly in their twenties or thirties, males & females, most of whom were armed with their hand-phones & digital cameras. There was only a handful of foreigners & oldies.

Young people reflect the rise of Chinese middle class & their mobility to travel & enjoy the pleasures of life long denied them. We found a couple of Australian tourists resting themselves by the shop front and upon chatting with them found that they had difficulties because of the language problem. Speaking & understanding Mandarin is necessary. Everybody speaks Mandarin. However, Mandarin or no Mandarin, people were generally friendly & helpful . . . smiling with a cheerful heart.

Dali against its snow-capped mountain. A street scene in a more outlying village of Dali. 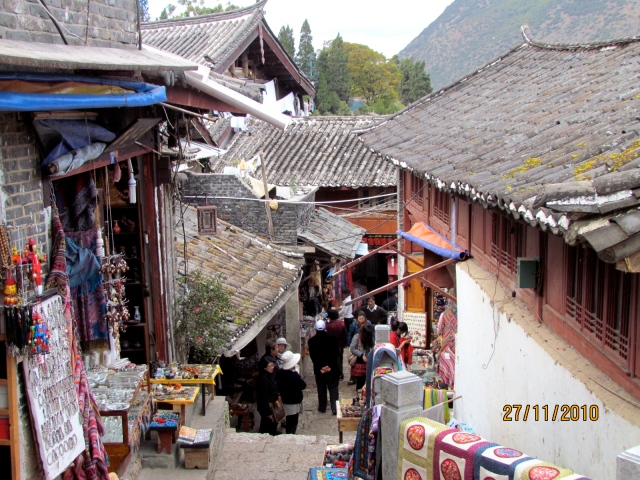