According to Wikipedia, George Soros born August 12, 1930, as Schwartz György is a Hungarian-American currency speculator, stock investor, businessman, philanthropist, and liberal political activist. He became known as “the Man Who Broke the Bank of England” after he made a reported $1 billion during the 1992 Black Wednesday UK currency crises.

Soros is chairman of Soros Fund Management and the Open Society Institute and a former member of the Board of Directors of the Council on Foreign Relations. He played a significant role in the peaceful transition from Communism to Capitalism in Hungary (1984–89), and provided Europe’s largest-ever higher education endowment to Central European University in Budapest. Later, his funding and organisation of Georgia‘s Rose Revolution was considered by Russian and Western observers to have been crucial to its success. In the United States, he is known for donating large sums of money in an effort to defeat President George W. Bush‘s bid for re-election in 2004. He helped found the Center for American Progress.

“George Soros has made his mark as an enormously successful speculator, wise enough to largely withdraw when still way ahead of the game. The bulk of his enormous winnings is now devoted to encouraging transitional and emerging nations to become ‘open societies,’ open not only in the sense of freedom of commerce but – more important – tolerant of new ideas and different modes of thinking and behaviour”. 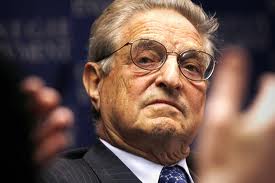 GEORGE SOROS, railway porter-turned-billionaire financier, has been a prominent international supporter of democratic ideals and causes for more than 30 years. He has delivered a stark warning that the financial world is on the wrong track and that we may be hurtling towards an even bigger boom and bust than in the credit crisis. His good sides are well documented, but what about his seedy sides?

Here are some very little known facts about Soros:

On YouTube you’ll find a whole series of video clips that would provide you with further negative information about this devious character of a man. You can best start off with “Prometheus: the Mysterious Mr. Soros”.

It is said that with the long arm of the law,

“You can run but you cannot hide”.

3 thoughts on “What You Don’t Know About George Soros”