Compared to the European continent, Australia is but one great continental mass without cultural heritage & may rightly be termed as a “cultural desert”. What Australia lacks in cultural history, it has some unique geological structures not found anywhere in the world. Ayers Rock in Alice Spring, Wave Rock & the Pinnacles in Western Australia are worthy of mention. In Victoria, close to Melbourne, is unquestionably “The Twelve Great Apost

The famous Twelve Apostles are the craggy iconic limestone stacks rising majestically from the Southern Ocean. They are sure to leave you spellbound. They rise up to 70 m from the ocean. You can view them from lookouts between Apollo Bay and Port Campbell. (See map) 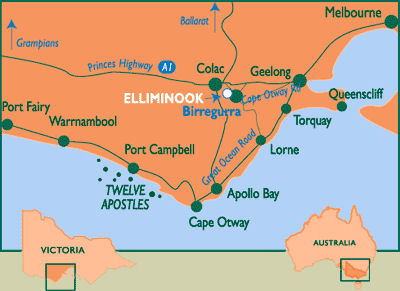 The 108-mile coastal drive along Australia’s south-western shore winds its way around rugged cliffs through lush rainforests & windswept beaches. Recognised as one of the world’s most scenic drives, the Great Ocean Road follows the stunning coastline of Victoria’s south-west. Stretching 243 kilometres from Torquay, just south of Geelong, to Allansford, just east of Warrnambool, the road winds along cliff tops, up to breathtaking headlands, down onto the edge of beaches, across river estuaries and through lush rainforests offering panoramic views of Bass Strait and the Southern Ocean at every turn.

Spectacular vistas – The stretch between Lorne and Apollo Bay is considered by many to be the most picturesque section of the Great Ocean Road. The highway is carved into sheer cliffs that drop away into the ocean, offering commanding views of the waves swelling and crashing onto the rocks and beaches below.

Twelve Apostles  – Outside Apollo Bay the road winds through the centre of the Great Otway National Park with its beautiful untouched rainforests, before returning to hug the coast for the entire length of the Port Campbell National Park. This is the most famous section of the Great Ocean Road featuring an amazing collection of rock formations known as the Twelve Apostles which have been carved out of the headland by the fierce waves of the southern ocean.

You can drive yourself to enjoy the scenic views or go along on a day trip tour by coach from Melbourne.