On the surface, this would seem such a rather silly, stupid and pointless question. Why, the average person would say that the American people own it. Or to be more technical, the American Government, which being a Republic, owned by the people, would be the owner.

You would expect a country as great & powerful as the US to be its own master. But far from that expectation, its financial system is wrapped in an intrigue web of the Federal Reserve System that would leave you spellbound. The President appears to be no more a political puppet on a string.

As strange as it may seem, neither the people of US or the Government of US own the Federal Reserve or the American Dollar. The truth of the answer is most critical of the nation & to hundreds of millions or billions of people globally.

The actual US dollar has not existed since 1913, where it was effectively killed. What is now called the US dollar is actually a Federal Reserve Note, says it right at the top of each bill. Why does that matter?

First of all, a US dollar, as something before 1913, was an instrument of wealth. That piece of paper, or just as common a gold or silver coin, had actual worth, anywhere in the world. It was worth its weight in gold, be it actual gold or paper. A Reserve Note, on the other hand, is a debt instrument, which not only is not wealth but is the opposite of wealth. Its very existence is a sucking sound on wealth, wealth being transferred, in this case not to the poor masses (as defined by defunct and unworking Marxism) but to the top 1% (equally defunct and unworking, but its only now starting to go that way).

The Federal Reserve, unbeknownst to many outside the US and almost everyone in the US, is NOT a Federal, that is, government entity. It is about as governmental as Federal Express. In truth, it is a wholly private, untraded, and thus unsupervised, banking corporation, with a secret cabal of owners. One can assess some of those probable owners by those corporations/banks who were bailed out, while others were allowed to die.

Effectively, this private banking concern, the only one of its kind in the world, has the exclusive right to make the US dollar, or rather the Federal Reserve Notes (debt) called the US dollar, the one and only legal tender of America. Now, when the US government wants or needs money, it can not simply “have” money. Put aside the notions about not starting the printing presses and so on, the simple fact is, not only can the US government NOT coin currency, it can not just have it either. Remember, these are Reserve (debt) Notes.

Rarely has so brilliant and patient a Ponzi scheme been dreamed up than this.

And by exporting it overseas, they are sucking in the rest of the world’s finance, into their ever greedy, chubby and purely evil little hands. In the end within a short span of time, the Federal Reserve gets to own everything!

So, leaders of the world, why the bloody Hell, are you giving away the future of your peoples and nations to this tiny group of American parasites, who have already bleed the US dead dry, where the top 1% holds over 60% of that nation’s raw wealth?

You would expect that something like the Federal Reserve, which we’ve all been taught to believe is a government agency of some kind. You’d think that it would have been created in Washington, D.C. in some kind of a committee room. But no, it was on Jekyll Island back in 1910. Furthermore, I discovered that the island in those days was privately owned by a small group of billionaires from New York City. People like J. P. Morgan, William Rockefeller, and their business associates. It was a private social club called The Jekyll Island Club. This is where the families of these very wealthy people J. P. Morgan dynasty, the Rockefeller dynasty, Kuhn Loeb & Company of New York, the Rothschilds from Europe, and the Warburgs from Germany and the Netherlands met and represented at that meeting & where they went to spend the cold winter months. They got out of New York and went to Jekyll Island. They had some beautiful cottages there and they’re all there today, by the way – if anybody wants to go look at them. They’ve been preserved. Isn’t it strange that the Federal Reserve was created at a meeting on Jekyll Island and that the meeting was conducted under conditions of extreme secrecy. Very few wars of history were plotted under greater conditions of secrecy than this meeting.You know, when something’s done in secret, there’s usually something to hide.

All of the important things that we need to know about the Federal Reserve System could be traced to that meeting on Jekyll Island – and in terms of the things that they were trying to hide from public view. Now, what were those things? It’s hard to summarise this. First of all, we have to realise that the Federal Reserve was offered to the voters back in 1913 when it was actually passed into law. It was offered to the voters as a solution to a problem. The American people were deeply concerned in those days about the concentration of financial power into the hands of a small group of powerful banking and investment firms on Wall Street. In those days, they used to call that conglomeration the “money trust“. That was what you’d find when you dug into the newspapers of the period and looked in the editorial section.

You’d find a lot of editorials condemning the “money trust“. People knew that there was too much power in the hands of a few people, so there was a clamour for legislation which was supposed to break the grip of the money trust. And the Federal Reserve Act was offered as the solution to that problem. So, we start off with the assumption that the Federal Reserve Act was to put control of the monetary system and the banking system back into the hands of the people and to break the grip of the money trust. All right, the first thing they were trying to hide at that meeting was the fact that the Federal Reserve System was written BY the money trust. The people who attended that meeting were the epitome of the money trust. These were literally the wealthiest men in the world. When you added up the wealth which was controlled by the seven men who went to that meeting, in accordance with the estimates of the writers at that time they estimated that these people either controlled directly or indirectly through the banking firms that they represented, approximately one-fourth of the wealth of the entire world. 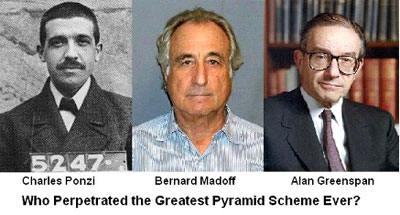 The Federal Reserve — the quasi-autonomous body that controls the US’s money supply — is one great “Ponzi Scheme” that created “bubble after bubble” in the US economy.

“It’s Not Illegal When the President Does It.” – Richard M. Nixon.

But “legality” is, after all, just a question of laws, as interpreted primarily by government lawyers. If the folks perpetrating the scheme have successfully penetrated the highest levels of government, than who’s to say what is illegal and what is merely “economics”?

I suppose in the end, it all comes down to physics. In physics, we can state categorically that there is no such thing as perpetual motion. Every self-contained system is confronted by little robberies of energy that will eventually cause it to grind to a halt.

Charles Ponzi mistakenly receives credit for inventing pyramid schemes of this nature. Back in 1920, he was ostensibly engaged in international reply coupon arbitrage. But with so many players interested in funding his gaming of the postal system, Ponzi soon abandoned any actual attempts to “invest” the incoming money in speculations of any type. Rather he simply began to pay off early participants with the cash he took from latecomers.

How can such a Ponzi Scheme still be in operation?

It beats me to the bone!