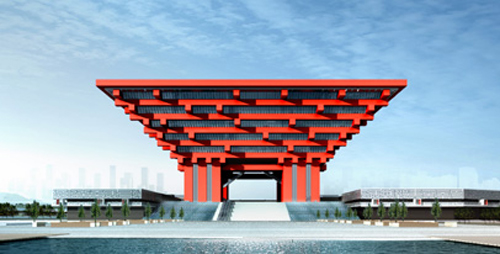 Long after Shanghai’s 2010 World Expo has gone, the China Pavilion still stands magnificently. This striking immense red structure is the first building you’ll see upon entering the Expo Park & the last one upon leaving.

It’s China’s gift to the people & to the world.

“The main structure of the China Pavilion, “The Crown of the East,” has a distinctive roof, made of traditional dougong or brackets, which date back more than 2,000 years. The dougong style features wooden brackets fixed layer upon layer between the top of a column and a crossbeam. This unique structural component of interlocking wooden brackets is one of the most important elements in traditional Chinese architecture. Dougong was widely used in the Spring and Autumn Period (770 BC-467 BC).”

The contour design of the pavilion is based on the concept of “Oriental Crown, Splendid China, Ample Barn, and Rich People,” to express the spirit and disposition of Chinese culture. The pavilion has a core exhibition area on the top floor, an experience area on the second and a functional area on the first. China’s achievements in urban development from ancient to modern times are shown as the core theme of the pavilion.

The China Pavilion sits right next to the Expo Boulevard and the Sun Valleys, which act as the center of the Expo. (Slideshow Below)

Painted the same red as the Forbidden City, the China Pavilion consists of four pillars with 6 floors expanding out and up. The 30 meter high roof is constructed from 56 wooden brackets (dougong), which represent the 56 minority ethnic groups of China. Additionally, nine folded scripts engraved on the surface of the building list the short names of China’s provinces.

Designed by He Jingtang, the director of the Architectural Academy of the South China University of Technology, “the Pavilion includes many energy saving technologies. The exterior of the structure offers a temperature buffer zone and natural ventilation for the interior, and the inverted shape of the pavilion acts as shading for entire building as well as the courtyard below. The roof of the structure includes eco-friendly landscaping and harvests rainwater.”

The China Pavilion, also known as the Oriental Crown, represents the spirit of the people of China and is one of the 5 permanent green buildings on the Expo Park converted into a national history museum.

Video hosted by Nancy Merrill below showing the background to its construction: 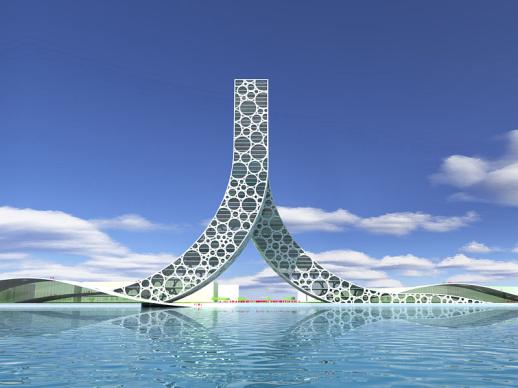 What do you mean by being a “Greenie Conservationist”?

To me, it would mean having a close affinity to mother earth & nature.

On this premise, China is about the most “greenie” globally in that most innovations are as a result of nature link. For instance, the fighting skills of Chinese martial arts are based largely on the movements of animals & birds & even insects.

There’s another aspect of greenery that I found, during my first visit to China in 1989, to be surprising lacking. I refer to the playing green & lawns – everywhere was largely paved as around the Forbidden City.

Now in this DNY age, with the threat of climate change, China is drawn even closer to this “green” technology, such as wind power for energy, great hydro-electric energy as in the Yangtze & green automobiles & buses. In the imminent World Expo in May 2010, there is a spectacular building depicting the Chinese affinity to the basic Five Elements of the earth – Fire 火, Water 水, Earth 土, Wood 木 & Metal 金. It’s the “Ren” 人 Building which I thought is much more impressive & meaningful than the main China Pavilion, as representing the wisdom of Chinese people. 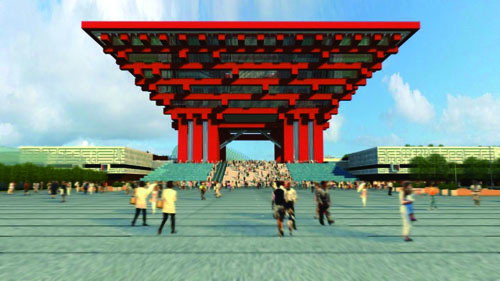 “Our cities must be places where human beings lead full lives in dignity, good health, safety, happiness and hope.”– The Istanbul Declaration on Human Settlement, by the United Nations Human Settlements Program

In line with The Istanbul Declaration on Human Settlements as depicted by the above picture, the theme of Expo 2010 is “Better City, Better Life,” representing the common wish of the whole humankind for a better living in future urban environments. 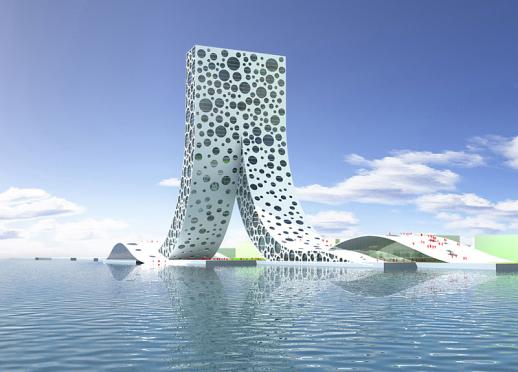 “Ren” 人 – People’s Building is unique – one of its kind in the world. Two arched bodies emerge – one on the ground, the other in water – in direction to the sky, united at the top and bonding in a unique monumental building of hurled forms, similar to a tube of perfumed action and bended by an immense force. Its profile suggests the Chinese alphabetic character which means “people”. That’s the way the People’s Building will be at the Expo 2010, in Shanghai,China. 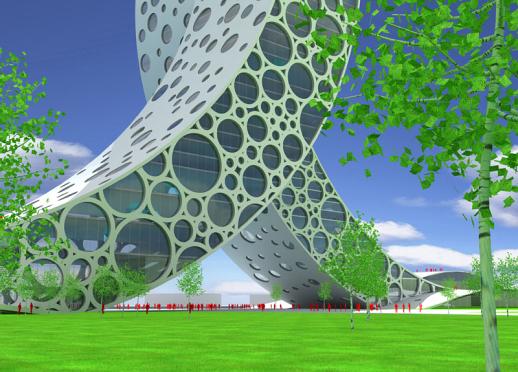 The Povo Building (codename: REN) is a project of a group of Danish architects and designers named BIG (Bjarke Ingels Group). An oriental philosophical form, a symbol which goes beyond the similarity with the calligraphic sign with whom it identifies. That way, the body emerges from water and is dedicated to the activities of physical culture, sports, etc.; since the emerging body of land is destined to activities such as “spiritual enrichment” – conference centre and others. At the point of encounter, where the building turns into one, is located a hotel of 1000 rooms! The project occupies 250 000m2 of constructed area.

It’s said that “The external is the internal of all of us”. When we look to the beauty of nature, we find that Five Elements provide the foundation for the entire world . . . Fire, Water, Earth, Wood & Metal – as the building blocks of all building materials . . . the basic principles of Feng Shui philosophy, including the Traditional Chinese Medicine.

If you are a Chinese scholar, you’ll be able to identify all the Five Elements depicted in the structure of the Building. 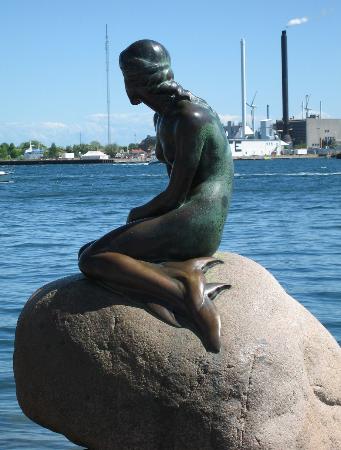 *(As a tourist attraction, the “Little Mermaid” sculpture at the Copenhagen Harbour will be flown to the Expo for display in the Danish Pavilion. I saw this “Little Mermaid” way back in the summer of 1959.)