Whoever wrote this piece did it very well indeed & is intended for greater circulation . . . provoking thoughts on
“political correctness” in all non-sensible government moves right through the deteriorating ages. 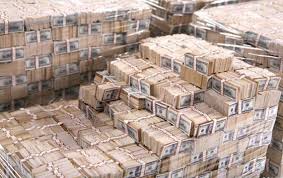 second, twenty four hours a day, seven days a week, you would still not have
handed out $1 billion after 31 years!!

This is too true to be funny.
The next time you hear a politician use the word ‘billion’ in a casual
manner, think about whether you want the ‘politicians’ spending YOUR tax
money.

A billion is a difficult number to comprehend, but one advertising agency
did a good job of putting that figure into some perspective in one of its
releases.

B. A billion minutes ago Jesus was alive.

C. A billion hours ago our ancestors were living in the Stone Age.

D. A billion days ago no-one walked on the earth on two feet.

E. A billion Dollars ago was only 13 hours and 12 minutes, at the rate
our present government is spending it.

STILL THINK THIS IS FUNNY?

Not one of these taxes existed 60 years ago and our nation was one of the
most prosperous in the world.

We had absolutely no national debt.

We had the largest middle class in the world.

Dad and Teachers were allowed to discipline kids.

A criminals life was uncomfortable.

‘Political Correctness’, Politicians or both?’ Arseholes !!!

I hope this goes around Australia and beyond at least 100 times!