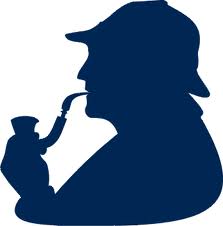 Sir Arthur Conan Doyle reportedly tells the story of the time when he went on vacation & had climbed into a taxi cab in Paris. Before Doyle could utter a word, the driver turns and asks, “Where can I take you, Mr. Doyle?”

The famous author was flabbergasted. He asked the cab driver if they had ever met before. They had not. It was in fact the first time they had laid eyes on each other. “The how the blazes did you know it was me?” Doyle asked.

The cab driver said, “This morning’s paper had a story about you being on vacation in Marseilles. This is the taxi stand where people who travel to Paris from Marseilles usually arrive at. Your skin colour tells me you have been on vacation. The spot of ink on your index finger suggests that you are most likely a writer. Your clothing is very English, and not French or German. Adding all these clues together, I deduced that you are Arthur Canon Doyle.”

“Good show! Well done!” exclaimed Doyle. “You are a real-life counterpart to my own Mr. Sherlock Holmes!”

“There is one other thing,” the driver adds.

“Your name is on the front of your suitcase.”!!

In scouting, you learn about the power of observation. This is where the taxi driver applied such skill to practice.