Many wonderful stories have been told of bottle messages found floating in the sea or found on the beach. You would have read about them at least when you were young & often marvel at them as fairy tales.

Is it fate or sheer coincidence that the message is ever found, very often years later?

Be it a random message stuffed into a bottle & thrown into the sea or one that is sent up in a balloon, both messages would eventually find their way in the hands of finders. Imagine the kind of fate & consequences in store. The stories that unfold are usually unbelievable & nothing short of miracles. It’s fascinating to say the least.

It’s interesting to note here two stories that appeared to be from the fairy realm.

(Technically this isn’t a “message in a bottle” story, but it’s the same concept—and the story is simply too good not to mention it.)

In June 2001, Laura Buxton (almost 10) released a red balloon into the air over her hometown of Stoke-on-Trent in Staffordshire, England. On one side of the balloon, she had written “Please return to Laura Buxton,” and on the other side, her home address. A few weeks later, a man 140 miles away in Milton Lilbourne found the balloon stuck in the hedge that separated his farm from the next-door neighbors. He noticed Laura Buxton’s name and address and immediately took the balloon to the neighbors’ house, showing it to the 10-year-old girl who lived there…whose name was also Laura Buxton.

Laura Buxton from Milton Lilbourne wrote Laura Buxton from Stoke-on-Trent to let her know that she had found the balloon. Thinking this coincidence was simply too amazing to be true, they decided they had to meet in person. And that’s when things got really weird.

On the day of the meeting, the two girls wore the same outfit – a pink sweater and jeans. The girls were the same height, which was unusual because they were both tall for their age. They both had brown hair and wore it in the same style. They both had three-year old black Labrador Retrievers at home, as well as gray pet rabbits. They both brought their guinea pigs, which were the same color and even had the same orange markings on their hindquarters. It was almost as though these two Laura Buxtons were the same person.

The strange events surrounding their meeting have helped the girls form a strong bond, and they remain friends eight years later. Both feel the circumstances that brought them together are too significant to be written off as mere coincidence.

Love in a Bottle

Ake Viking was a lonely Swedish sailor who decided to place his search for love in the hands of fate. He wrote a simple letter “To Someone Beauitiful and Far Away,” corked it inside a bottle, and tossed it overboard in the hopes that it might help him find a young woman to marry. 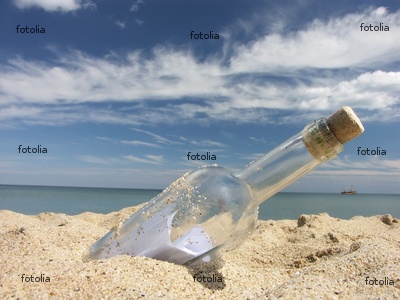 Two years later, in 1958, he was surprised to receive a letter from a Sicilian girl, Paolina, who said, “I am not beautiful, but it seems so miraculous that this little bottle should have traveled so far and long to reach me that I must send you an answer…” The two began writing one another and, three years after he threw a bottle into the sea, Ake moved to Sicily to marry his very long-distance love.

How do these stories, coincidences at minimum, divine intervention at best, make you feel?

Whenever such messages are found, it invokes a sense of fairy tale. The idea that two people have made a connection that would mathematically be virtually impossible gives us hope that life is more than a series of random events. Fate does play a part or if you are a believer, there is such a thing as Divine intervention.

Will we ever make contact with the outer world if wkeep sending messages into cyberspace?

3 thoughts on “Miraculous Messages From The Sky & Sea”