Australia – The Great “Down Under” 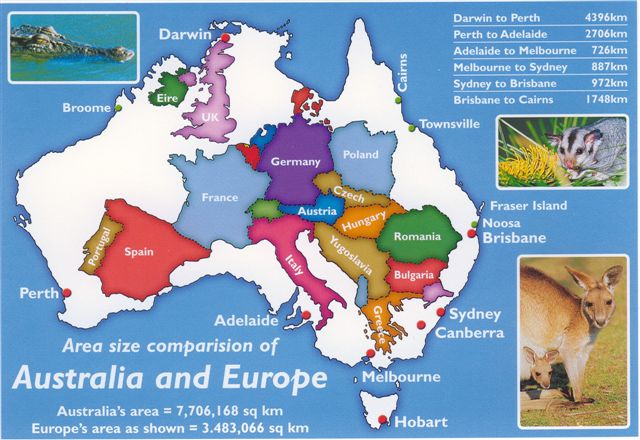 This land is not my land

This land is not your land

This land is God’s land

To inherit it you’ve got to be fit

That you love one another

Sharing with one another

Caring for one another

Giving and not just taking

Working and not shirking

Then the land will prosper

Only then the land will be ours.

Australia is richly endowed with natural resources, and was acclaimed the richest country in 1885 & 1900, until overtaken & replaced some 50 years later by US & Canada. In terms of climate, recreation, literacy & personal freedom it stands supreme. It rates a perfect 10 for climate & recreation along with France, Italy & the US. Renowned as a great sporting nation, its prowess in swimming is second only to the Americans. It is a definite “S” country excelling also in sand, sea & surf.

Its long-held position as the rich man of Asia has been assailed by Japan, S. Korea including its closest Asian neighbour Singapore and of course the great emerging economies of India & China. Such economic ills prompted the then Federal Treasurer Paul Keating to refer Australia as the “Banana Republic”.

It’s said that one cannot be tied to his mother’s apron string all through life. For far too long Australia has looked towards UK & the West for its trade & economic activities. In a changing world, none so true as the present, we cannot afford to be rigid & fixed in our policies. We need to be dynamic, adapt, adopt & adjust according to the direction of the economic wind. Fostering a closer economic link to China & the other Asian economies won’t be such a bad idea.

Way back in 1982 when I first migrated here in Perth, the country was besieged with recession, “Bottom of the Harbour Scheme”, union strikes, political leadership challenges . . . summarily not the best of times. My thoughts at that time are best portrayed in this poem of mine published in the local press on August 23, 1990 entitled: “Think Big”

In this vast and lucky country

We have yet to be complementary

We should be in the “Think Big” league

But smallness and pettiness we dig.

Traditionally, by virtue of our isolation

We tend to be restrictive in our constitution

We are even confused about our identity

Even finding it hard to accept our originality.

We need to relate well to the Aborigines

Accept and help them towards our destiny

The “Wogs”, the “Chings” are here to enrich

Rather than make the country perish.

Having a closed mind or closed society

Is more detrimental than you can see

There’d got to be unity in diversity

Together shouting to the troubled world of our victory.