It was here that he got his inspiration for it, and that’s where landscape similarities exist.

Huangshan stands supreme from amongst the five reputed mountains

of China – Taishan, Huashan, Hengshan & Songshan. These are all sacred mountains renowned for their scenic beauty. However, there’s an old saying well known throughout China “No need to see any other mountains after Huangshan!” 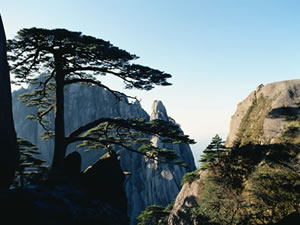 Huangshan derived its name from the famous Yellow Emperor who frequented the place as his retreat. Since ancient times, inspiration of artists, painters & poets has come alive in this southern Anhui Province of high mountains, rocks, pine & cedar trees, sea of clouds, snow & spectacular nature’s beauty. It is a majestic place of perpetual scenic beauty in all the seasons and is now listed in the UNESCO World Cultural and Natural Heritage.

A magnificent place with its spectacular vista & ever-changing scenes have drawn visitors from all over the world. Our son Andrew, a keen amateur photographer, has been there in all the four seasons. But winter is reputedly the best season to enjoy the sea of clouds & snowy scenery. 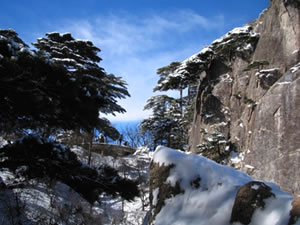 In December 1998, we took the cable car up Huangshan & stayed the night. We couldn’t have chosen & imagined anything more freezing that night & day. Everywhere was covered with snow & ice. It was absolutely beautiful but frightfully cold & the cable car service stopped to function which was unexpected. The only way down the mountain was by foot. We were advised to purchase special spikes for our shoes if we were attempting to go down the mountain on foot as the trail & steps were icy & slippery. It was very risky & dangerous to say the least – the trail & steps had no side railing or protection. It could mean one slip & eternally down the steep ravine.

To a certain degree we were encouraged to see workers & labour transporters literally running up & down the mountain with the added weight of load strung over their shoulders. Most goods, foods & even building materials were transported by human labour in that fashion. 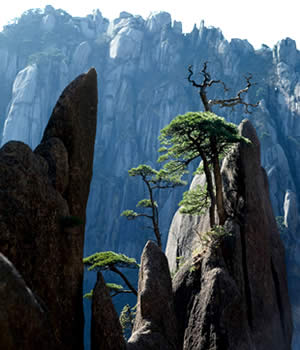 We reached the foot of Huangshan safe & sound with, however, days of ache & pain to remember the descent by. Fortunately, there was compensating gain in the sight of scenic beauty marking our journey with a sweet & bitter refrain. (Info Update: src=’http://player.cntv.cn/standard/cntvOutSidePlayer.swf?v=0.171.5.8.8.7&#8242; type=’application/x-shockwave-flash’ lk_mediaid=’lk_juiceapp_mediaPopup_1257416656250′ lk_media=’yes’/>//