Westerners have always been seeking for Shangri-La, the utopian lifestyle. Search no more. There is in reality a place such as this in China. Talk no more of Hangzhou or Suzhou. It’s a miracle wonder of a place!

It’s called Huaxi, a booming market town of 36,000, first set up in 1961 in the affluent eastern province of Jiangsu. Everyone here has all the luxury that life can offer such as a huge house, a car (Benzs, BMW etc.), even free cooking oil, clothes, healthcare, education etc. Huaxi has fixed assets of 3 billion Yuan (US$362 million). All they have to do is work 7 days a week for the village industrial operations, milling steel or some such industry. Only one condition is that you can never leave. If you do, you lose everything. But just to make it easier to stay, the city has built replicas of the Eiffel Tour, the Sydney Opera House, and the Arc de Triumf to bring the world to its doorstep.

People are not leaving. In fact, it’s attracting lots of migrant workers who hope to be accepted for work permit & in time enjoy such privileges like the permanent residents of Huaxi where each household has been assigned a car & a single-family home of 400 square metres, earn around US$6,000 per head per year. Compared with migrant workers who toil for an average monthly wage of 500 yean (US$60), the prosperity enjoyed by Huaxi villagers is an undeniable miracle

Like the song Hotel California – “You can check out anytime you like but you can never leave”. 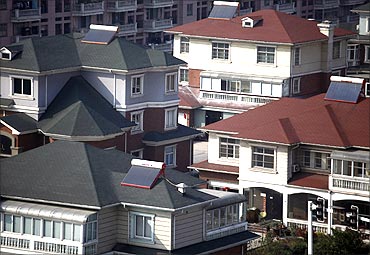 But why would you want to leave when you’re already living in the best place of the world, as one resident said. Leaving is not the option but “living it up” and seeking other higher aspirations is the objective.

And all this started with the dream, hope & aspiration of one man, Wu Renbao (now in his eighties) who combine market economy, socialism with Chinese characteristics.

When Chinese Daily writer Raymond Zhou wrote of Wen Renbao’s retirement, the announcement created aftershocks in the country media similar to what Bill Gates’s retirement about speculation in the software industry. Now Huaxi is headed by Wu Xie’en his fourth son, as elected 100% by the community.

This  amazing video will help clear your curiosity.