In the grip of nostalgia, I revisited Guangzhou in November 2010. I was first there in 1989 when it was no more than an“international sprawling village” with old derelict buildings, narrow twisted streets & lanes . . . so very crowded with both people & bicycles. Today, there is only one word to describe the scenes that greet the eyes – unbelievable! It’s a miraculous transformation!
Guangzhou, known invariably as Flower City & City of Rams, is a historic-cultural city with a history of 2200 years. Today, it’s an economic power-house in the south of China. Its growth is phenomenal and as part of the conglomerate group of the nine cities to form the largest megapolis in the world, it will continue to spearhead the future growth of the Pearl River Delta region. (Please refer “China – World’s Largest Megapolis” on 25 February 2011).

As with all the major tourist places, first class hotels were sprouting up everywhere to usher in tourists in the 1980s. Guangzhou then boasted of its famous White Swan Hotel, located on the historical Shamian Island, the old concession zone during the late 19th century and early 20th century (where dogs and Chinese were forbidden). It overlooks the Pearl River and faces the White Swan Lake. Reached by its own private 635 meters causeway, the White Swan Hotel is only 10-minutes drive from downtown and 1-hour drive from New Baiyun International Airport.

Opened in 1983 and refurbished in 2002, it is still majestic though there are now many other 5-star hotels. The White Swan Hotel boasts of a total of 843 exquisitely decorated and well appointed guest-rooms. All rooms and suites are comfortably furnished and well-equipped with modern amenities. The restaurants in the hotel offer a wonderful variety of Chinese and Western food. Fitness and entertainment facilities in the White Swan Hotel include swimming pools, gymnasium, sauna and massage room, squash and table-tennis room and so on. 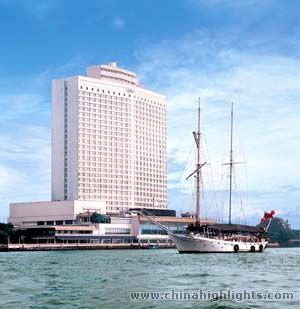 It is best known for its elegant design and high quality service. Its lobby is featured with a tropical waterfall and a display of many huge jade carvings. The hotel used to receive visiting foreign heads and government officials and was regarded as the landmark building of the city of Guangzhou in 1980s and 1990s. The hotel amenities even include a toy room sponsored by Mattel that provides toys for children of every age and gender.

Shamian used to be a place where foreign enterprises concentrated with a lot of western- style buildings. Now Shamian has become a beautiful city park with cafes and bars here & there.

Having stayed there during our first visit to China in 1989, it’s really reminiscent to be seeing it again after more than two decades.