Million population cities in China are a dime a dozen. According to a Mckinsey Report, China by 2025, will have 219 cities with more than one million inhabitants, compared with 35 in Europe today and 24 cities with more than five million people. China doesn’t do things by halves. Take the Three Gorges Dam for instance – it’s the largest hydroelectric project in the worldcosting some $39 billion to build. China builds around 20 brand new cities each year – a phenomenal scale the world has ever known.

Now the ‘Turn The Pearl River Delta Into One’ scheme will build a 16,000 square mile urban area that is 26 times larger than Greater London, or twice the size of Wales, says The Telegraph report. This will be equivalent to the size of Switzerland.

The Chinese government has announced plans to amalgamate the nine major cities in the Pearl River Delta (home to a manufacturing-driven economic boom) into a single city with a population of 42 or more million people (more than Argentina, the world’s 32nd largest country), occupying an area twice the size of Wales. The “Turn The Pearl River Delta Into One” will link all of these centers by high-speed rail links that will put every point in the new megacity within an hour’s journey of every other point.

The ambitious plan will see China attempt to combine over 150 major infrastructure projects including transport, energy, water and telecommunications networks over the next six years. This alone is expected to cost £190 billion. On top of this, an express rail line is will be constructed to connect the mega-city with nearby Hong Kong. Twenty-nine rail lines, totalling 3,100 miles, are to be constructed to reduce rail journeys around the urban area between the different city centers to a maximum of one hour of journey. Hospitals and schools will be improved as a result of the development.

“The idea is that when the cities are integrated, the residents can travel around freely and use the health care and other facilities in the different areas,” said Ma Xiangming, the chief planner at the Guangdong Rural and Urban Planning Institute and a senior consultant on the project. He continued, ”It will help spread industry and jobs more evenly across the region and public services will also be distributed more fairly.”

On the green side, pollution, which is a major problem in the Pearl River Delta due to the major industry cities, is to be addressed with an “united policy.”

The long-term plan for China is to move ever greater numbers into its cities, creating some city zones with 50 million to 100 million people and “small” city clusters of 10 million to 25 million.

Briefly, to sum up what Ma Xiangming said: 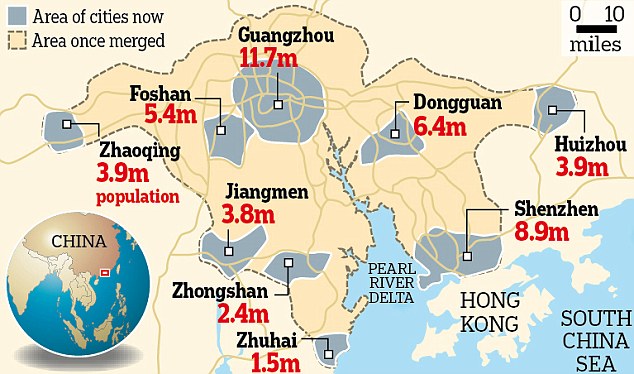 Its total urban infrastructure investment will equal about £685 billion over the next five years while, by 2025, it will have added some 350 million city-dwellers to its population.

As in a grand prix race, while you stall others will roar. China is doing all that it positively can to be in the lead.

Would the name “Pearl-Megalopolis” be apt for the unnamed megacity?